David Trone of Total Wine spoke at the Kogod School of Business‘s annual Alan Meltzer CEO Leadership Speaker Series about his entrepreneurial experience. Total Wine is the country‘s largest independent retailer of wine. Founded in 1991 by David and his brother Robert, the company started with one small store in Delaware. Today, the company boasts 130 across 18 states.

Trone shared stories about his achievements as well as his failures, missteps and difficulties, including trouble facing certain state liquor laws. He has worked with policymakers to create more business friendly legislation. Though not every attempt ended beneficially for Trone, he used his failures to motivate himself.

“I’m happy as hell to fail because I went out and did something. Failure needs to be our friend because failure means we’re innovating,” Trone told those in attendance.

Interestingly enough, Throne has been experiencing new roadblocks in trying to set up an online store for Total Wine. Trone has worked to find solutions to accommodate each state’s liquor laws.

“You can’t ignore what’s going on in government because as you get bigger they put a bulls eye on you,” said Trone. 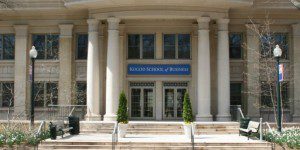