Baltimore’s fresh food providers will now have a new face sitting on their board. According to a recent press release, Baltimore Mayor Catherine E. Pugh has named J.C. Weiss, a Senior Lecturer and Executive in Residence for Finance at the Merrick School of Business, to the Board of Directors for both Lexington Market and the Baltimore Public Markets Corporation (BPMC).

Weiss’ background is primarily in the venture capital industry, a subject he teaches at Merrick. According to Weiss’ bio, he has a passion for social entrepreneurship and has both founded and co-founding several organizations and businesses. Now, he will serve a one-year term on the boards, which provide leadership for the city’s network of six markets boasting a wide array of fresh food.

According to the organization, Baltimore’s Public Markets are the oldest continuously operating public market system in the United States, predating even the city’s mayor’s office. The markets were actually founded in 1763 as a way for traveling tradespeople to sell their wares in a common space that was convenient for all.

Today, Baltimore has six public markets: Hollins, Northeast, Avenue, Broadway, Cross Street, and Lexington Market. Each market has its own array of fresh, locally-sourced foods, including high-quality meats and fresh seafood. Baltimore’s more adventurous eaters can also use the markets as a place to find interesting and exciting ethnic cuisines, such as crabcakes, tripe, beef tongue, rabbit, and muskrat.

BPMC is not the only board Weiss will sit on. He is also a member of the Chesapeake Business Finance Corp, Baltimore Clayworks, UniversitySystem of Maryland Foundation, Engineering Society of Baltimore, St. Agnes Hospital Foundation, and the Greater Baltimore Technology Council.

Weiss is just one of the many well-respected business professionals that the Merrick School of Business is happy to have on its faculty. The school was founded in 1925 and has been offering an MBA program since 1971. The AASCB accredited school is Baltimore’s most central and accessible college campus, situated across the street from Baltimore Penn Station. 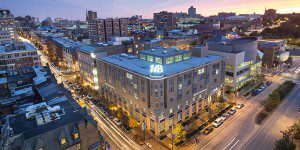