Part-time MBAs offer an abundance of perks: more flexibility, online courses, and even weekend and evening classes. They open the door for professionals who want an MBA but might also have children or a full-time job or other responsibilities that take priority.

If looking at the East Coast, two cities may come to mind: New York City and Boston. Both are drastically different metros just by the size alone. New York City is home to more than eight million people. Boston is nearly 675,000. That’s a big difference.

But both places have plenty to offer. It just comes down to what a person is looking for.

Here is the quick version for both cities:

New York City is one of the greatest cities in the world. This is true when it comes to culture, business, networking, and all of the above. People from all around the world frequent this city. The city has its quirks, of course. The public transit system is in a state of emergency. During the summer, it’s not uncommon to find putrid smells sneaking into your nostrils. And there are, of course, the pests and rodents.

But all of this is worth it to the many transplants who move to New York City. After all, the city does hold the title of the world’s second largest metropolitan economy, following Tokyo—a city with a significantly larger population. More than three million of the city’s residents are foreign-born, which is a perk for someone who wants to break into the international sector. New York City really is a magnificent place if you’re looking for vibrancy and a taste of the world beyond the U.S. may look like. It’s a global city.

Every school offers its unique set of courses and perks. St. John’s University’s Tobin College of Business has classes during the evenings and weekends. Its curriculum is straightforward: Take 54 credits with a maximum of 36 going toward your concentration.

For NYU Stern, there’s a bit more flexibility. Students can take up to six years completing their MBA if they need. If just the weekends are ideal, candidates are limited to two concentrations: finance and management. The campus is diverse with 34 percent of students female and 24 percent people of color.

The Rutgers Business School is a little far out with its campuses in New Jersey. However, that’s a short ride from New York City (and the cost of living is cheaper in New Jersey, too). The school’s part-time program doesn’t stray too far from its full-time one. It includes an interactive course requirement and makes sure that its students walk away with a working knowledge of statistics and calculus. Math will come in handy when handling business.

The Zicklin School of Business at Baruch College allows students interested to pursue their JD/MBA in partnership with Brooklyn Law School or New York Law School. Accountancy majors can also obtain a CPA with their MBA.

Boston is like a little piece of Europe in New England. Perhaps that’s why Boston sits at the heart of the region. Its cobblestone sidewalks and streets are an ever-present reminder of the region’s history. While it is certainly not as bustling as New York City, it doesn’t mean it’s quiet. Boston is always booming with tourists on the hunt for the perfect lobster roll or college students traversing their way to class. It’s also culturally diverse with most of its population non-white.

The city doesn’t see the musty summers that New York does, but it does see some severe winters. If snow’s your thing, that’s a perk. If it’s not, well, tough luck. The city does, however, rank among the highest concentrations of employment, so a graduate is sure to find a job in the area. Unlike New York, Boston has already invested in its public transit infrastructure to ensure that residents can get around easily.

Then again, that means parking and driving in the city sucks. You can’t have it all.

At Northeastern University, flexibility is a strong suit. The program starts in September and January of each year, but students can take as long as they need to complete the program. The D’Amore-McKim School of Business gives students the option to take part in an international field study, which last one to two weeks.

The Carroll School of Management at Boston College gives online and hybrid courses. The school is big on experiential learning, so it does a great job of exposing students to real-world professionals. If a student already holds a CFA or CPA, they are eligible for advanced standing. Like many other Boston schools, the Carroll School is big on expanding students’ experiences beyond Boston. They take TechTreks to nearby New York City or even Seattle. But that doesn’t exempt students from the mandatory 20 hours of community service.

The Sawyer Business School offers a part-time MBA that can be completed in 10 months. That’s shorter than some full-time MBA programs. There’s a summer option, too, for anyone who’s in a rush to graduate. From the beginning, candidates must plan for their career with their first semester including a one-credit business simulation course. The program also has a three-credit global requirement. Students have gone on to China and Brazil in the past for a week-long global travel seminar. 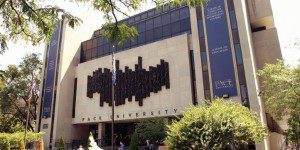