Why Bloomberg Businessweek Is Praising the UGA Terry College of Business

At the top of last month’s annual Bloomberg Businesweek domestic MBA rankings, the normative favorites reigned supreme, with the likes of the Harvard Business School, the Wharton School at the University of Pennsylvania, and the MIT Sloan School of Management sitting at the top of the ranking.  A quick glance at the top 20 features more of the same, with Ivy League institutions coming in strong, as well as other large school powerhouses like the UCLA Anderson School of Management.

But the real meat and potatoes of the list, beyond stacking trophy cases for the already trophy-rich schools at the top, are the schools that shoot up the rankings the most, sometimes jumping eight or more spots from the previous year. Among the most lauded institutions that made its way up the rankings is the University of Georgia Terry College of Business, climbing from 65th overall in 2016 to 55th overall this year.

Santanu Chatterjee—the full-time MBA Director and Associate Professor of Economics at the Terry College of Business—recently spoke with MetroMBA, saying that part of the reason the school has earned such high praise is because of the concentrated effort of life after graduation.

The school has “a purposeful and deliberate strategy that connects admissions, student experience, and career management, by focusing on employability at the front end, a high level of customized career services for both students and employers, and a market-driven curriculum that ensures professional success for our students,” according to Chatterjee, who originally joined the Terry College of Business in 2001, just after earning his Ph.D. in economics from the University of Washington. 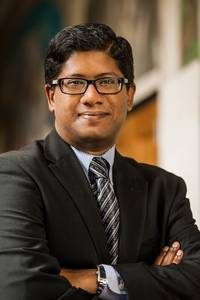 Although the Terry College of Business is part of the University of Georgia, one of the largest state schools in the U.S., its reputation still lags a bit behind some of the other big name brand institutions. As evident in its climb in the Bloomberg Businessweek ranking, however, its reputation as one of the better, under-the-radar business schools may be soon changing as the result of a plan that has been years in the making.

“Over the past three years, we have focused on making our curriculum more sensitive to the needs of the marketplace,” he says. “Initiatives have included new concentrations in Healthcare Management and Human Resource Management, areas of emphasis in Consulting and Financial Technology (FinTech), and an expanded focus on experiential/project-based learning. Most of our students complete one project with a corporate partner before their summer internships. We have also revamped our Leadership Fellows Program, and set up two new advisory boards, in Atlanta and in the Silicon Valley.”

Part of the wave of program changes over the past few years also comes from newfound partnerships with many of the University of Georgia’s other esteemed colleges, establishing newfound dual degree programs to help facilitate an academic edge many of the country’s smaller schools simply cannot provide.

“While we continue to work on making the MBA curriculum more market-driven, we are also focused on a more interdisciplinary approach to business education,” he says. “Over the past three years, we have worked to develop new dual degree programs with the College of Engineering, Law School, Medical School, and the College of Public Health. New dual programs are currently being developed that include the College of Pharmacy and a one-year STEM MBA for UGA undergraduates in the STEM disciplines. A new one-year Master of Science program in Business Analytics is also awaiting final approval from the University System. These new programs will enable us to significantly expand our corporate relationships and partners, which in turn will help support our curriculum and student support initiatives.”

The use of broader university resources speaks to what Chatterjee believes is becoming a definitive advantage to not only Terry College of Business students, but University of Georgia students as a whole.

“Across the board, the Terry College of Business is focused on student success by providing them with an outstanding academic and experiential learning experience,” he notes. “This philosophy cuts across programs at all levels, from undergraduate to the Masters and Ph.D. [programs]. We have a roster of world-class faculty, excellent facilities, and a dedicated network of more than 70,000 alumni who work tirelessly to improve the quality of education and career success for our students.”

Even with the noted praise Chatterjee eschews for the business school, one program strength he may be overlooking is the welcomed affordability of the Terry full-time MBA, which only costs Georgia-based residents $15,670 per year, compared to several of the more popular MBA programs in the U.S., which often venture into triple digit territory by the end of the program.