After years of potential development, research, and deliberation, Vanderbilt University officially opened the Graduate School of Management in 1969. In 1977, less than ten years after its initial opening, the school was renamed in honor of Ralph and Lulu Owen. Ralph, a 1928 Vanderbilt alum, was an initial founder of Nashville’s Equitable Securities Corporation, the eventual holding company of American Express. Following the passing of Ralph and Lulu in the early 1980s, the family’s estate awarded the business school $33.5 million, which, at the time, was among the single largest offerings to a business school in U.S. history.

The business school is accredited by AACSB International.

The Owen Graduate School of Management is located in the northeastern section of the Vanderbilt University campus in downtown Nashville, Tennessee. The campus is about 15 miles west of the Nashville International Airport.

The Owen Graduate School of Management is housed in the aptly titled Owen-Building, which features the Walker Management Library, which was renovated in 2017—30 years after it officially opened. The library features a massive database to help facilitate learning in “for finance, marketing, operations, accountancy, and other business sub-disciplines,” according to the school.

The Vanderbilt University Owen Graduate School of Management full-time MBA Class of 2020 features 179 students that are, on average, 28-years old. These students enrolled in the program with an average GMAT score of 680 and an undergraduate GPA of 3.3. An estimated 30 percent of the class are female students, with 16.4 percent international students, and 15 percent U.S. minority students.

The average size of a Vanderbilt Owen EMBA class is around 50 students. These students usually have around 11 years of previous work experience and a GMAT score of 615. About 34 percent of the Owen EMBA student body are women.

The Owen Graduate School of Management offers a traditional, full-time MBA and a 21-month EMBA program, in addition to several specialized master’s programs. 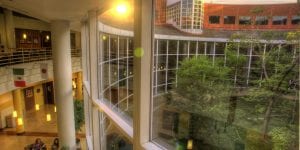