Can an MBA Get You a Job With The Historic Coca-Cola Company?

The Coca-Cola Company is among the most famous global companies in existence, with not only profoundly successful sales, but an immense cultural presence. It was, in fact, a 1931 Coca-Cola advertising campaign that was responsible for creating our modern image of Santa Claus (hence the red and white suit). But Coca-Cola’s success extends beyond its legendary advertising campaigns and signature font. According to a 2016 piece in Business Insider, people worldwide drink 1.9 billion servings of the soft drink every day.

For MBAs interested in a global career with a brand that is both established and committed to innovation, Coca-Cola is worth more than a cursory glance. While its headquarters are in Atlanta, Georgia, Coca-Cola MBA careers can be found in Asia, Europe, Latin America, Eurasia, Africa, and other parts of North America.

The individual perks of working for the Coca-Cola Company are widespread and unique. In the past, employees have had the chance to compete for tickets to the Olympics and FIFA World Cup (where they would be dutifully covering the events, of course).

When describing their workplace culture, Coca-Cola has said, “We are the brand.” The company’s website states that Coca-Cola’s core values are leadership, passion, integrity, accountability, collaboration, innovation, quality, and diversity. A document the company created in 2009, “2020 Vision: Our Roadmap for Winning Together With Our Bottling Partners,” embodies these tenets. In addition to announcing the company’s goal to double system revenues, it details goals for fostering a collaborative work environment, increasing sustainability, and making a positive contribution to the community.

If you’ve invested in an MBA, naturally, you’ll want to be sure your new job prospects offer a sizable return. Payscale puts the median salary for MBAs working at Coca-Cola at a respectable $97,937. And, with locations in over 200 countries, Coca-Cola certainly does not suffer from a shortage of opportunities. 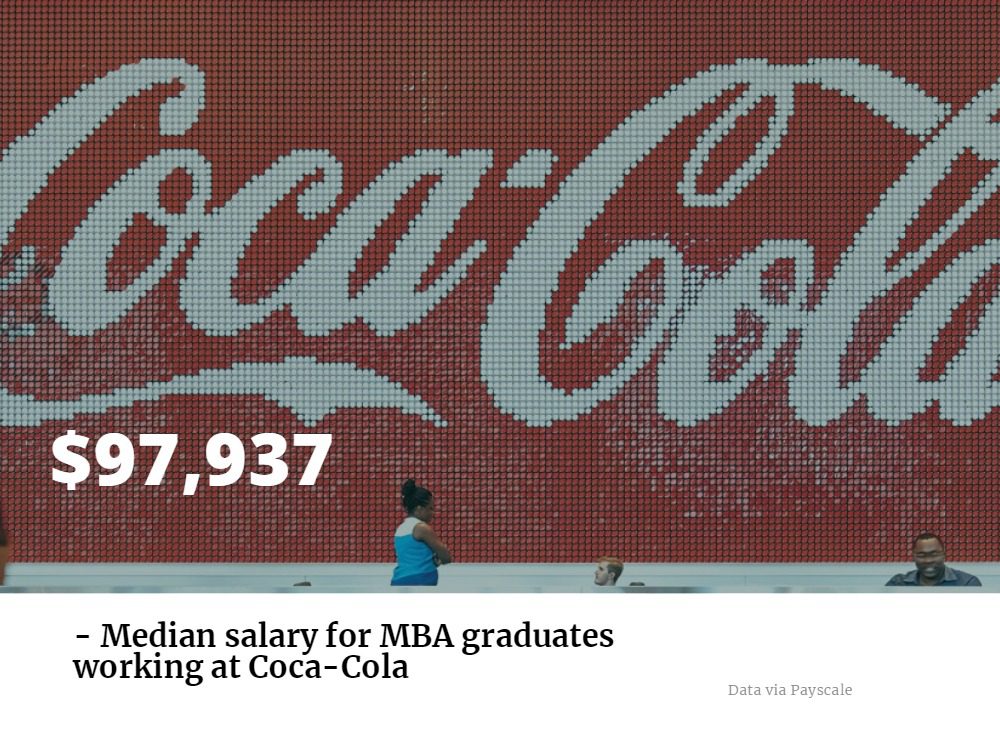 Where Do You Start?

According to Internships.com, “Landing an internship with Coca-Cola is one of the best ways to get your foot in the door and drastically improves your chances of landing a full-time job at the company after graduation.” Coca-Cola offers a variety of paid internships through its University Talent Program. Full-time internships are available for students interested in human resources, sales, product supply, business, and finance. First-year MBAs can apply for the finance internship, which will allow them to work in and observe the company’s finance organization, where they will gain experience in areas like internal controls and supply chain finance. Stand-out interns may be offered a role in the Finance Leadership Program. The two-year program is an immersive look at the finance sector of Coca-Cola that includes a variety of mentoring and networking opportunities.

In addition to internships, MBAs qualify for a number of jobs at the Coca-Cola Company. LinkedIn currently lists ten Coca-Cola job openings for MBAs in just the Atlanta location, let alone the other locations worldwide.

We’ve summarized just a few of the job opportunities for MBAs below.