On April 11, 2017, the University of San Diego appointed Gail F. Baker, Ph.D. the new Provost and Vice President of Academic Affairs. With more than 30 years of higher education experience, Dr. Baker is a distinguished leader. She comes to USD from the University of Nebraska Omaha where she currently serves as Dean of the College of Communication, Fine Arts and Media (CFAM) and Executive Associate to the Chancellor. Dr. Baker will officially begin her role as Provost and Vice President of Academic Affairs at USD in July.

Dr. Baker was chosen by USD after a selective and extensive national search. In the end, the search was narrowed down to several highly qualified candidates, including three finalists, each of whom visited the USD campus to meet trustees, faculty, staff and students. Dr. Baker succeeds Andrew T. Allen, Ph.D., who has been vice president and provost of USD since 2013.

“After meeting with Gail, she quickly emerged as someone whose unique combination of administrative and academic experience has prepared her well to transition to an academic leadership role at the University of San Diego,” said President James T. Harris III, D.Ed. in a press release. “Gail was a leading candidate of choice among faculty, staff, students and the selection committee, which speaks to her qualifications, her commitment to academic excellence and her appreciation of USD’s mission, values and rich Catholic intellectual tradition.”

Dr. Baker comes to the university after having been accredited by the Public Relations Society of America, where she is also a member of the College of Fellows. She’s an experienced teacher, scholar, communications practitioner and writer—having authored many books and articles. In fact, her work has been recognized with four Emmy Awards for Excellence in Documentary Writing and Producing.

As dean of the CFAM at the University of Nebraska Omaha, Dr. Baker has experience articulating strategic priorities and securing resources for success. One of the highlights of her career was helping to restructure the college into three distinct but collaborative schools.

“Thank you to President Harris, the search committee and the entire USD community for inviting me to be a part of such a special institution,” said Baker. “I am extremely blessed to have found a campus of kindred spirits. I look forward to being a part of a team that helps bring the Envisioning 2024 strategic plan to fruition and further develop USD’s strong liberal arts curriculum and outstanding graduate, law and professional programs.” 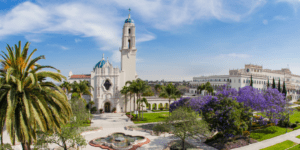