How Affordable are Baltimore MBA Programs Compared to DC?

A few years ago, the Baltimore Sun published a hilarious list outlining 100 reasons why Baltimore is a better city than Washington DC. Here are some of our favorite reasons:

Yes, some of these reasons are very tongue-in-cheek, and the list aimed to be light-hearted and irreverent. But if you’re a prospective MBA in the DMV, there are some clear advantages to picking a business school in the Baltimore metro over the Washington DC metro, namely the affordability of programs.

Let’s take a deeper dive and see just how affordable Baltimore MBA Programs are compared to their DC counterparts.

Which MBAs Can You Earn in Baltimore and DC?

Both Baltimore and Washington DC are home to some of the country’s most prestigious business schools and MBA programs. Programs offered in the Baltimore metro include:

Meanwhile, MBA programs offered in the Washington DC Metro include:

How Affordable are Baltimore’s Programs Compared to DC’s?

Yes, both metros boast and impressive programs that are sure to provide prospective MBAs with a high-quality business educations, but which city offers the more affordable options?

Here is the average cost per credit hour at business schools in Baltimore.

Let’s compare these tuitions rates to the MBA offerings in the Washington DC area:

When looking at tuition costs, Baltimore takes the cake. Even though Baltimore boasts the most expensive full-time program (Carey Business School Global MBA), the average cost per credit hour for both in-state and out-of-state students is about 16 percent lower in Charm City.

Aside from tuition, business students living in the Baltimore area have a lower cost of living then their Washington DC counterparts. According to Numbeo, you would need around $4,541 in Baltimore to maintain the same standard of life that you can have with $6,100 in Washington DC, assuming you rent in both cities. This calculation uses the website’s Cost of Living Plus Rent Index to compare cost of living.

Here’s a closer look at how Numbeo creates its Cost of Living Indexes, and a breakdown of a few key stats to look at when comparing Baltimore to Washington DC:

The case for Washington DC

So Baltimore’s MBA offerings are, on average, more affordable than Washington DCs. But what if money isn’t an issue, or you happen to get into a program in DC? Here are a few ways that the Capital City has the Monument CIty beat, according to Thrillist:

Oh, and remember that Baltimore Sun article we reference at the top of the page? Enjoy DC Inno’s slightly more punchy response. 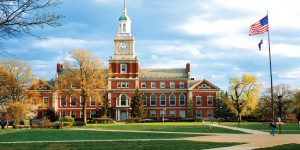