For the fourth year in a row, Stanford GSB MBA graduates earned record high salaries with the mean base salary reaching $145,559. According to the 2018 Employment Report, this broke last year’s record compensation. On top of that, this year Stanford GSB grads also received jobs from a record 421 organizations for both summer internships and full-time positions. This demonstrated the broad appeal and diversity of Stanford MBAs.

Other highlights from this year’s employment report included an increase in interest in the technology industry. In fact, in 2018 it was the most popular industry, garnering 33 percent of alumni—an 8 percent jump from last year.  Other top industries included finance, which garnered 31 percent of graduates with private equity being the most sought after area with 13 percent of graduates.

Since three years ago, the percentage of women going into private equity and venture capital has doubled. As for tech, this year a record 40 percent of women chose to work in the tech industry. This shift has many explanations, not the least of which is the coursework taught at Stanford. For Ashley Brasier (MBA ’18), all it took was the class “Entrepreneurship & Venture Capital from the Perspective of Women” to change her course from consumer tech to VC.

“This class showed me that there are several different paths into VC, and empowered me to pursue VC opportunities,” Brasier says.

This year, the number of non-U.S. work-authorized students who accepted jobs in the U.S. stayed flat at 74 percent. More likely than not, this is a result of global trends that are causing extra challenges for students seeking to move locations. This was also reflected in the $12,000 median salary gap between U.S. work-authorized and non-U.S. work-authorized graduates. However, “when controlled for industry and job location, for example in emerging markets, the salary gap diminishes and in some cases disappears,” says Yossi Feinberg, the Senior Associate Dean for Academic Affairs.

“This year, 72 percent of the class said they expected a bonus over last year’s 66 percent with average expected bonuses of $64,527.”

And when it came to job offers, numbers remained unchanged. For the Class of 2018, 88 percent of the class accepted offers 90 days after graduates with 95 percent receiving offers. As for where students received these offers, a record 421 organizations hired Stanford graduates this year.

“Our leading employers span a wide variety of industries—consulting, finance, technology, consumer products, healthcare, and nonprofits—but what they have in common are work environments that offer the ability to make an impact, optimize on career development, and provide diverse challenges and responsibilities,” says Carly Janson, the Action Assistant Dean and Director of the Career Management Center. 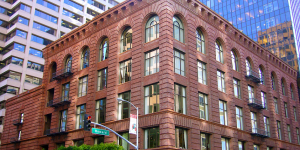