Over 100 years since the original founding of Eastern Michigan University in 1849, the school’s College of Business officially opened its doors in 1964; roughly 50 years after the university began offering business education programs. The formation of the business school, which provided its first MBA degrees in its initial year, was formed through the initial formation of five academic departments: accounting and finance; management; marketing; general business; and business education. The latter was later absorbed into the university’s college of technology.

Undergraduate programs at the school first earned AACSB-accredited in 1974, with the MBA program following in 1982. Eight years later, the school introduced its part-time Weekend MBA program.

The Eastern Michigan University College of Business is located southeast of the university’s central campus in Ypsilanti, Michigan, on the western border of the Huron River. The campus is less than 20 miles west of the Detroit Metropolitan Wayne County Airport.

In 1991, the Eastern Michigan University College of Business moved to the 122,000 square foot Gary M. Owen Building, which can be accessed from the central campus through a shuttle running every 20 minutes.

There are currently 510 graduate students enrolled in the Eastern Michigan University College of Business, with 1,630 undergrads and 629 minors. 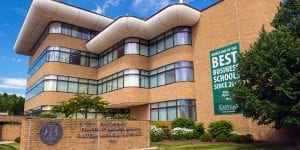