Thanks to her strong business education from the University of Dallas – Satish and Yasmin Gupta College of Business , MBA graduate Kelly Jones was given the once-in-a-lifetime opportunity to attend this years’ biggest sporting event: the Super Bowl.

Kelly Jones, MBA ’15, was given the chance to attend the 2017 Super Bowl, which took place in early February at Houston’s NRG Stadium. The opportunity came about as a result of Jones’ employment with Legends Hospitality — the newest business partner of the Atlanta Falcons — but Jones believes it may also be a result of connections she made while at Gupta.

“The connections I made through the MBA at UD proved extremely valuable to my career, because, honestly, without the guidance of Scott Wysong I wouldn’t be working for the Falcons today,” Jones commented.

The string of events which ultimately led to Jones’ employment with the Falcons began after Wysong, Associate Professor of Management at Gupta and director of the MBA program, recommended that she attend a university career fair. The fair helped her land a job at the Dallas Stars before moving on to Atlanta.

“Breaking into sports is hard,” Wysong said. “There are not a lot of jobs or a lot of people who want to work in that industry. I always encouraged our MBA students to volunteer, intern or do whatever they can to get their foot in the door.”

With Wysong’s encouragement, Jones was able to get her foot in the door. Today she serves as a premium sales consultant with Legends Hospitality, a company which manages ticket sales for the Atlanta Falcons. Her job involves selling personal seat licenses (PSL) inside Mercedes-Benz Stadium to those who currently hold season tickets for the Falcon’s old stadium, the Georgia Dome. PSL Sales have been on the rise as the Falcons have worked their way to their second-ever Super Bowl, despite being on the losing-end of an infamous collapse to the New England Patriots. 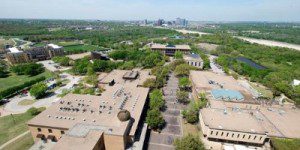 Satish and Yasmin Gupta College of Business – University of Dallas