The College of Business is located on the Texas A&M – Commerce campus in the city of Commerce, Texas. Commerce is about a one-hour drive northeast of the Dallas metroplex. Additionally, Texas A&M Commerce students can pursue a MBA at the Universities Center at Dallas. Texas Commerce A&M also offers students the option to complete their MBA entirely online.

The Gee Library, one of several Texas A&M – Commerce libraries, is open 24 hours. Students have access to computers, research materials, and group study rooms. The library also has a 24-hour laptop check-out service for students.

Students at the Commerce College of Business also have access to the Global Entrepreneurism Lab. The GEL offers materials from local, governmental, volunteer and other organizations dedicated to entrepreneurship. These are available to both students and local small business owners.

Around 78 percent of students at Texas A&M Commerce identify as male, while 22 percent identify as female. Nearly 24 percent of the most recent class were born outside of the United States. Students entered the graduate school with around six years of prior average work experience.

Texas A&M – Commerce offers its MBA on campus and online. 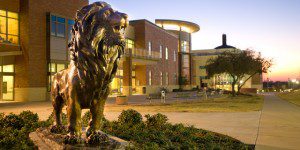