For France, Belgium, and Croatia, the raw enthusiasm of making the semi-finals of the 2018 World Cup is nearly impossible to measure. But if it were possible, it might be hard for either of those country’s to match the torrid energy that England is swelling in at the moment.

Hours before today’s match with Croatia, which toppled host-country Russia last weekend after penalties in extra time of a 2-2 contest, the Three Lions and its fans await nervously for the opportunity to reach the finals for the first time in 1966; the lone year England claimed the World Cup championship mantle.

On the eve of the June 14 opening match between Russia and Saudi Arabia, Alex Edmans, professor of finance at the London Business School, warned that an early exit by England in the tournament could spell a “£12 billion” loss for the English stock market. Since that early exit nightmare did not come to pass, however, LBS has been repeatedly posting the original article on Twitter, for reasons one could only assume have to deal with natural English pessimism.

“A Three Lions elimination from the upcoming World Cup could have a significantly negative effect on financial markets” – @aedmans #worldcup https://t.co/LP3QEEibQa pic.twitter.com/veFmos2jL4

While England can finish no worse than fourth overall in this summer’s tournament, which would be the country’s best finish since 1990, there is still a tantamount level of emotions heading into the World Cup semifinal match. According to The Independent, beleaguered Prime Minister Theresa May’s fate could rest on the team’s performance, noting that former PM Margaret Thatcher lost her role near months after England lost West Germany in the ’90 semis. The tongue-and-cheek piece from Matthew Norman translates the last few months for May in the vein of England’s last semi-final performance, writing, “More than a year on, while she still looks as tactically clueless on Brexit as Steve McClaren, you wonder whether her strategy for taking on Brussels is similar to Gareth Southgate’s in the group game against Belgium.”

For those who may not be familiar with the haunting visage that was the London’s failed run at the 2008 UEFA Euro tournament, McClaren, managing England at the time, was sacked after the team unceremoniously failed to qualify for the tournament after a loss to, which was finalized with a loss to—you guessed it—Croatia. 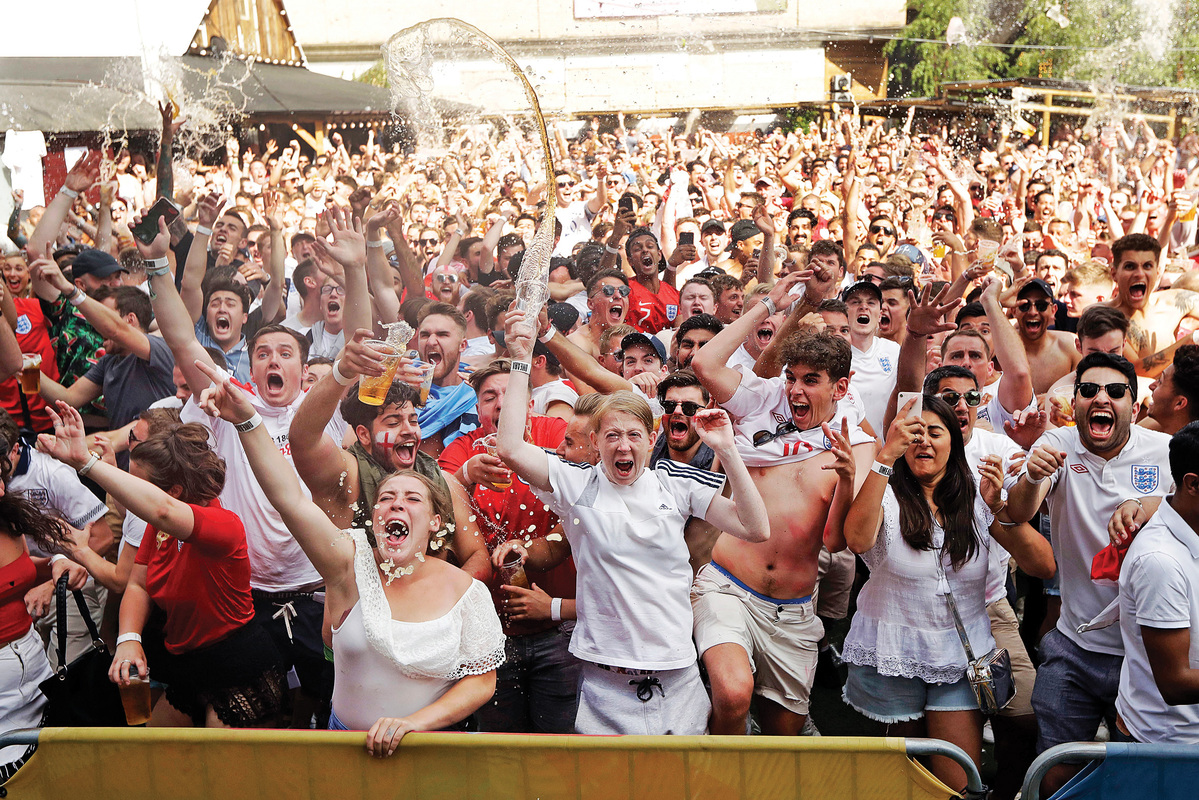 England fans react after a goal during the country’s quarter-final match with Sweden / Photo by Matt Dunham, AP

Ten years after the McClaren fallout, England and it’s continually cynical-yet-optimistic supporters look on as Harry Kane and Raheem Sterling sit atop Southgate’s 3-5-2 attack, primed for a potential rematch with Belgium (which defeated England 1-0 in the Group Stage), or national rival France. Still, getting passed Croatia’s brutally talented midfield duo of La Liga stars Luka Modric and Ivan Rakitic in the World Cup semifinal will be a test in its own right. If it can be done, “it’s coming home” may finally begin to feel real (and maybe LBS will stop with the negative tweets).