Check out some of the latest news coming out of business schools in the Los Angeles metro this week.

Hanna and Mark Lim, husband and wife entrepreneurs, recall the crucial role the UCLA Anderson School of Management played in the $100,000 investment their company was awarded on the hit TV show Shark Tank.

In 2012, Hanna and Mark presented a pitch for their startup company, Lollacup, which produced safe sippy cups for children. Going into the pitch stricken with fear, Mark reminded Hanna of an important piece of advice he had received during his business school education. While at UCLA Anderson, Mark had already gained experience in pitching business plan. During school, he and his classmates would often pitch ideas not just for professors but for professional venture capitalists. Throughout all this, he learned to not be overwhelmed by the celebrity of the investors but to instead treat them as equals.

“We’re here pitching to investors who are essentially our equals,” Mark told Hanna before their Shark Tank pitch began. “We’re not here for a handout; we’re not here to beg. This is an investment. We’re potentially handing over part of our company that we’ve built.”

The advice payed off, with both Mark Cuban and Robert Herjavec deciding to invest $100,000 for 40 percent of the company. What began as Lollacup has since re-branded as Lollaland, which provides a range of products for infants and toddlers, and recently passed $2 million in sales.

You can read more about the Lims and their experience on ‘Shark Tank’ over at Business Insider.

Neel Patel, a MBA/MSHCM at the California State, Los Angeles College of Business and Economics, was recently awarded with a $3,000 scholarship from the Health Information Management Systems Society (HIMSS). HIMSS, a premier organization for professionals in the healthcare information management field, presented Patel with the award earlier this summer, making him the second student in Cal State LA history to receive the distinction. Patel has left his mark on the university before, however, as part of the winning team in this year’s Western Regional Healthcare Executives College Bowl Case Study Competition.

Patel connected with the HIMSS through Thao Tran, Chair of Academic Alliance Community for HIMSS, who was brought in as a guest speaker for one of Patel’s classes. Tran has been a crucial part of the connection between CBE and the HIMSS, helping introduce students to the organization and its benefits since 2011.

Read more about Health Information Management at CBE and the HIMSS here.

In Network Security, “The Bad Guys are Always Ahead” – USC Marshall Newsroom

Richard Drobnick, Director of the IBEAR MBA program at USC’s Marshall School of Business, recently interviewed Global CTO of NTT Security Kazu Yozawa for the USC Marshall Business Class podcast. During the interview, Yozawa maintains a positive view of the future of network security but warns vigilance. From young forgers to state sponsored hacking, the threats against network security may be greater now than ever.

According to Yozawa, “only a few executives understand the situation,” making education surrounding security and how computer networks operate will be crucial going forward.

You can listen to the full interview here. 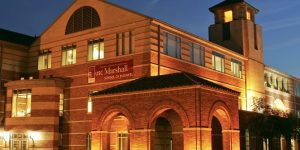