Pick Your City: Should You Get an MBA in Miami or Atlanta?

When it comes to the Southeastern U.S., we’ve already compared Charlotte and Atlanta, but what if you’re looking for a little more fun in the sun? There’s few better locations for pristine beaches, great food, and fabulous nightlife than Miami. It’s a city steeped in culture and the gateway to Latin America, but how does it compare to Atlanta when it comes to business schools?

To help you out, our “Pick Your City” series is comparing Miami, FL, and Atlanta, GA. We’ll give you insight into the cost of living of each city, the job opportunities, the MBA programs, the culture, and more.

Miami vs Atlanta: Cost of Living

What about the culture of each city—which one best fits your lifestyle? Atlanta is called, “the next Miami,” so that should give you a decent idea from the outset. Both cities have very culturally diverse populations, excellent food, and warm weather. They are also both densely populated and continuously growing.

Miami is recognized as the cultural, economic, and financial center of South Florida.

Nicknamed the “Capital of Latin America,” Miami is well known for its large Cuban-American population, young residents, and high-volume of Spanish-speakers. So, it should be no surprise that Miami attracts a culturally diverse array of individuals.

Those individuals have many enjoyable activities to enjoy. Miami is home to many entertainment venues, including theaters, museums, and performing arts centers. It’s also a major fashion center with many top modeling agencies and models calling the city home. As for the cuisine, Miami is heavily influenced by the Caribbean and Latin America, which resulted in the creation of the always-excellent Cubano.

Lastly, you can’t talk about Miami without mentioning the parks and beaches. Miami has tropical weather all year-round, which means you can always spend time outdoors. It’s a popular location for water activities, including boating, fishing, kite surfing, and more. Then, there are the Everglades, which stretch for miles just to the west of the city.

Atlanta has a dynamic but distinctly Southern culture. It’s home to a large population of migrants from all around the U.S. as well many new immigrants, making it a multi-cultural hub in the Southeast. Thus, it’s considered a cosmopolitan city with quirky neighborhoods and a wonderful cultural fabric.

Atlanta is also very focused on the arts. It is one of the few cities in the U.S. with permanent, professional, and resident companies for opera, ballet, orchestral music, and theater. Which means there are always great concerts, shows, exhibitions, and Broadway acts to enjoy at the Woodruff Arts Center, The Fox Theater, or the Alliance Theater.

Atlanta is also a popular tourist destination, attracting 35 million visitors per year. The Georgia Aquarium, the world’s largest indoor aquarium, is one of the main attractions, but so is Martin Luther King Jr.’s childhood home. There’s also the Atlanta Botanical Garden, the National Center for Civil and Human Rights, and the World of Coca-Cola.

Miami is a true metropolis and a major leader in finance, culture, media, commerce, entertainment, and international trade. The city has the 12th largest urban economy in the U.S., worth an estimated $344.9 billion GDP, and in 2018, Miami was classified as an Alpha level global city by GaWC. This equates to Miami being an incredible location for business activity, information exchange, human capital, political engagement, and cultural experience. According to a UBS study of purchasing power, it’s the third-richest city in the U.S. and the eighth-richest in the world.

Top employers in the Miami area, include:

Atlanta’s metropolitan area is home to the tenth-largest economy in the country, and among the top 20 in the world. The city is also headquarters to many well-known corporations such as The Coca-Cola Company, Home Depot, Delta Airlines, AT&T, Chick-fil-A, and UPS. In fact, more than 65 percent of Fortune 1000 companies conduct business in the area. Media, transportation and logistics, information and technology, film and television are all big industries in the metro as well.

Some of the top employers in Atlanta, include:

Both Miami and Atlanta offer quality MBA programs. We’ll take a quick look at the top three programs in each location. 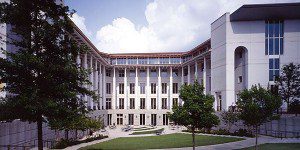