In 1926, the original UF College of Business was founded, earning AACSB accreditation just three years later in 1929. Four years later, the school began to centralize its effort, reforming as the College of Business Administration. One year after the conclusion of WWII, the school began offering its first official MBA degrees. In the decades since, the business school has rapidly expanded its campus and degree offerings, introducing an MBA for working professionals in 1993, an Online MBA in 1999, and multiple specialized master’s program.

The Hough Graduate School of Business, the graduate school of the Warrington College of Business, was officially named after William R. Hough, who donated $30 million to the college of 2007. Hough was part of the original MBA class at the University of Florida in 1948.

The Hough Graduate School of Business is located at the northeast corner of the University of Florida campus in Gainesville, just south of the central Warrington College of Business building. The school is located about five miles southwest of the Gainesville Regional Airport.

William R. Hough Hall, named after the same William R. Hough in which the graduate school of business is named after, officially opened in 2010. The 70,000-square foot facility features state-of-the-art classrooms, interpersonal career development and counseling centers, academic and recruitment offices, as well as study rooms, a small area for dining, and the Financial Markets Laboratory on the third floor.

Over 6,800 students are enrolled in the Warrington College of Business, with over 1,700 Master’s students, and approximately 58 Ph.D. students and 55 DBA students in the Hough Graduate School of Business.

The Hough Graduate School of Business offers a traditional full-time MBA program, as well as a one-year and two-year part-time and a traditional Online MBA, an Executive MBA, and a Professional MBA in South Florida. There are numerous dual MBA degree program options available. 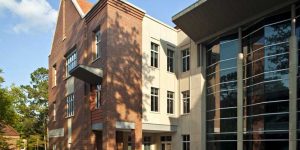 All Hough Graduate School of Business – University of Florida News »