Philadelphia or Pittsburgh: Which City Should I Choose?

Pennsylvania’s two major cities—Philadelphia and Pittsburgh—are key geographic connectors and historical seats of political and economic influence in the U.S. These two urban centers have much to offer those moving to the next stage of their career. In this installment of Which City Should I Choose? we compare Philadelphia and Pittsburgh so you can decide which city is a better fit for you.

Both cities boast positive economic job growth (both past and future) and a steady influx of students and young professionals. This reflects the desire for new-comers to pursue both education and job opportunities.

Philadelphia, the “City of Brotherly Love,” is the 8th-largest metro economy in the U.S. Forbes ranks it among the top 100 Best Places for Business and Careers. The Greater Philadelphia region is home to 12 Fortune 500 companies. With a significant shift from information technology to a service-based economy, Philadelphia is one of the largest health education and research centers worldwide—with positive job growth of 14 percent over 10 years.

In the 1950s, Pittsburgh was the eighth-largest city in the U.S., responsible for more than half of the nation’s steel production, which earned it the nickname, “Steel City.” No longer the industrial giant of the Post-War years, Pittsburgh has reinvented itself. The city established a diversified economic center with a legitimate arts/culture scene, admirable healthcare options, and tech start-ups aplenty. Out-growing similarly-sized Midwestern counterparts in both population and economy, Pittsburgh has been called a “global innovation city” by the Brookings Institute and has had positive job growth of 2.3 percent over 10 years.

Philadelphia or Pittsburgh: By the Numbers

BestPlaces.net cites Philadelphia’s average household income as 15 percent higher than Pittsburgh’s among median earners. However, Pittsburgh is 13.5 percent more affordable to live in than Philadelphia. Here are some more comparisons:

Eagles and Steelers fans have the outstanding reputation of being some of the toughest and most dedicated in the country. While the Philly cheesesteak has international notoriety, Pittsburgh perogies is nothing to take for granted.

Despite PA’s recent decisions to allow federal agents free reign on arresting and deporting undocumented immigrants, both cities were built and are shaped significantly by their immigrant denizens. Proportionally, Philadelphia has a much larger population of people of color, with a 34.9 percent white population, while Pittsburgh’s population is 64.7 percent white.

SMU DataArts rates Philadelphia among the most vibrant arts communities in large U.S. metro areas, with well-known historical landmarks, award-winning restaurants, and the nation’s largest urban park. With major efforts put toward reshaping riverfront areas—including the Strip District—Pittsburgh also has a lot to offer, with outdoor activities, shopping, restaurants, and arts events. Both cities have notorious rush hours but significant bicycle infrastructure for recreation and commuting.

For prospective MBA students looking for the best city for their education, both cities have attractive options. Philadelphia is home to several stand-out programs, including Drexel University LeBow College of Business and the long-standing king of the MBA mountain, The Wharton School at University of Pennsylvania—ranked first in the nation by U.S. News and World Report. Pittsburgh also offers a number of noteworthy MBAs, including University of Pittsburgh’s Katz Graduate School of Business and the Tepper School of Business at Carnegie Mellon—both ranked among the top 50 MBAs. 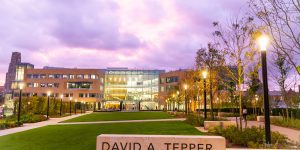