The business roots of the University of Pittsburgh trace back to 1907 with the Evening School of Economics, Accounts, and Finance. By 1916, after the school had been officially set up on the University of Pittsburgh’s Oakland campus, it became one of the 17 founding members of the AACSB (Association to Advance Collegiate Schools of Business). By 1963, the school introduced an accelerated One-Year MBA program, the first graduate business school to do so. In 1987, the business school was renamed for alumnus Joseph Katz, after a generous $10 million donation.

The main campus of the University of Pittsburgh is located in the Oakland neighborhood of Pittsburgh, and the Katz Business School is centrally located within the urban campus adjacent to two nearby parks. Downtown Pittsburgh is easily accessible by foot, bike, bus, or the “T”, Pittsburgh’s underground rail system.

Katz’s MBA programs are housed inside Mervis Hall, a building built in 1983 and renovated in 2007, and includes a financial analysis laboratory, business library, coffee shop, and cafe. The school’s Executive MBA programs are within Mellon Corporate Financial Hall on the fifth floor of Alumni Hall, a main building on Pitt’s campus comprised of over 98,000 square feet of functional space.

There are 104 faculty members at Katz who contribute to the school’s seven research centers, including a Center for Branding and the Center for International Business. The acclaimed faculty were rated #3 in the U.S. and #5 in the world in Faculty Quality by the Economist in 2017.

Approximately 105-120 new students and 75 second-year students enroll in the full-time MBA programs each year. In the most recent EMBA Worldwide class, 38 students enrolled.

The Katz School of Business offers full-time One and Two-Year MBAs, a Professional MBA, an Executive MBA in Healthcare, two Executive Worldwide MBAs, and joint and dual MBA options. There is also an MBA with Business Analytics, which requires a Katz MBA and a University of Pittsburgh Graduate Certificate in Business Analytics. 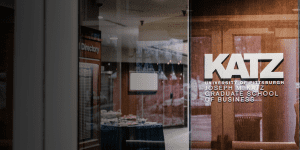