In 1933, Purdue University delivered its first Bachelor’s degree in economics, offering an MS in economics the following year. Decades later, in the early ’50s, Purdue’s Department of History, Economics and Government separated its Department of Economics, becoming the Department of Economics in the School of Science, Education and Humanities. In 1956, three years after the department split, the school introduced the Department of Industrial Management and Transportation within the Schools of Engineering, creating the Master of Science degree in industrial management. After expanding the school’s Master’s programs, Purdue University formally introduced the Krannert Graduate School of Industrial Administration in 1962, after receiving a $2.73 million endowment from Herman C. and Ellnora Decker Krannert.

After years of continued expansion and implementing more Master’s offerings, the Purdue University Board of Trustees officially changed its name to the Krannert Graduate School of Management and School of Management in 1976. Decades later, the school officially changed its Master of Science in Management to the Master of Business Management, and soon-there-after introduced several alternative MBA programs, including the Weekend MBA, Executive MBA, and the all-new Online MBA.

The business school is AACSB-accredited.

The majority of undergraduate classes at the Krannert School of Management are held at the Krannert Building, while many of the graduate offerings are held at Rawls Hall. The former was opened in 1964, with the latter opened in 2003 after the school received a $10 million donation from Jerry S. Rawls Hall. The 128,000 square-foot, four story building features 13 state-of-the-art classrooms, auditorium, 25 break rooms, computer labs, and a dedicated career center.

The most recent Purdue Krannert full-time MBA class featured 48 students, 33 percent of which are female. The average age of the class is 28. Students join the program with an average of 5.4 years of work experience, a 633 GMAT score, a 3.26 undergraduate GPA, and a 102 TOEFL score.

In addition to its full-time MBA program, the Purdue University Krannert School of Management offers a part-time Weekend MBA, an Executive MBA, and an all-new Online MBA, arriving in 2020. 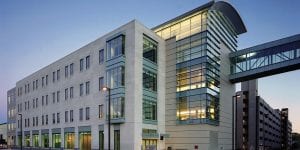