Let’s explore some of the most interesting stories that have emerged from New York City business schools this week.

Which News Outlets Have the Most Power? – Columbia Newsroom

Columbia Business School recently published research surveyed from 18 different countries, which uncovers that “television news is by far the most dominant and influential news source and the number of news sources that people rely upon and trust has a direct correlation with their income levels.”

CBS professor of business Andrea Prat explains, “Countries around the world are experiencing information inequality, with a distinct subset of the population depending on just one or two sources for news. In turn, this makes a certain set of large news organizations particularly powerful.”

You can read more from the report here.

“Another one bites the dust,” writes CNN Money journalist Danielle Wiener-Bronner, remarking the full-scale closure of the once-iconic toy distribution empire Toys ‘R’ Us. Wiener-Bronner notes that the closure comes around six month after the chain filed for bankruptcy in fall of 2017, struggling for years to compete with other distribution chains like Wal-Mart and Amazon. 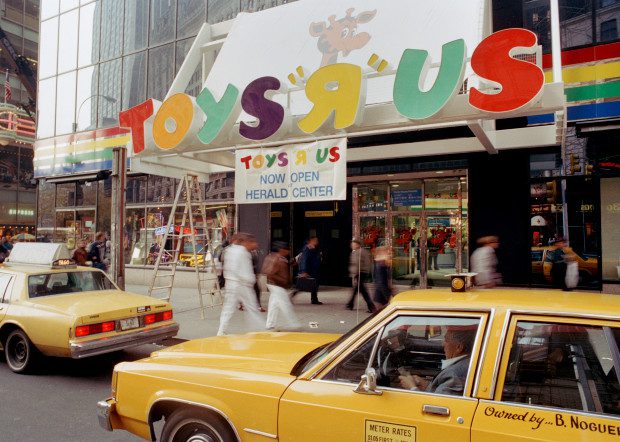 A photo of the grand opening of the Toys ‘R’ Us store in Manhattan. The 70-year-old former retail giant will soon be liquidating all of its U.S. and UK locations. Photo via AP/Richard Drew

Tulin Erdem, chair of NYU Stern‘s Marketing Department, spoke with Wiener-Bronner about the news, noting that while nostalgia can be very powerful when it comes to marketing, it just isn’t enough sometimes.

“You can have a comeback with [nostalgia], but you can’t sustain it,” she said.

While Toys ‘R’ Us stores will be effectively shutting down in the U.S. and UK, and upwards of 30,000 employers will lose their positions, the closure will never erase the sheer joy of driving a 2-seater child rider car in a department store. You can read the rest of the CNN Money report here.

“Hofstra University’s Co-Op MBA program provides students with an integrated educational and professional work experience in their field of study, allowing them to expand their experience and responsibility,” the school noted in a recent press release. “With New York City’s business community only 25 miles away, you’ll also have access to many non-classroom learning experiences.”

The program requires the completion of 38 to 45 credits, with classes available full-time, both day and night. The co-hort size will be between 25 and 30 students, offering 12 separate concentrations, including: accounting, business analytics, finance, and more.

Click here to learn more about the school’s newest program.