Yale University began offering business degrees in the mid-20th century through the school’s Department of Industrial Administration. From the late 1950s through the 1970s, the school offered a Master’s in Industrial Administration. By 1973, after receiving a donation from alumnus Frederick W. Beinecke, the institution re-established itself as the School of Organization and Management. From 1976 to 1994, the School of Organization and Management offered a two-year Master’s in Public and Private Management, until it re-organized once more as the Yale School of Management. After which, the school discontinued offering the Master’s in Public and Private Management degree. In 1999, the school officially introduced its MBA program. Several years later, its also began offering an Executive MBA and a Master’s of Advanced Management.

Yale University has called New Haven, Connecticut its home since the early 18th century, originally founded as one of the nine colonial colleges that pre-date the American Revolution. The main campus, located in the heart of the city just north of the Long Wharf, is approximately two hours outside of New York City by either car or train. The closest airport—the Tweed New Haven Airport—is less than 10 miles away from the central campus.

Evans Hall, home to the Yale School of Management, is located at 165 Whitney Avenue.

Currently, the Yale School of Management employs 97 full-time professors and around 70 adjunct and visiting professors. The approximate student-to-faculty ratio is 6:1.

A total of 347 students enrolled in the Yale School of Management Class of 2020. An estimated 43 percent of the class is made up of female students and 45 percent international students. The median GMAT of the class is 730 and the median GPA is 3.71.

The Yale School of Management offers a traditional two-year full-time MBA, as well as an EMBA, as well as multiple specialized Masters degrees, and joint MBA programs, such as an MBA/JD, an MBA/MD, and MBA/PH.D., and an MBA/MFA. 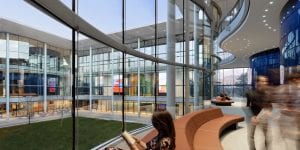 All Yale School of Management News »