Established in 1870, The Stevens Institute of Technology is eponymously named for a family of mid-19th-century engineers and inventors. Originally dedicated to mechanical engineering, Stevens initially offered “M.E.” degrees, but also awarded several Ph.D.s between 1870 and 1900, making the school one of the earliest doctorate-granting institutions in the United States.

Broadening its offerings significantly over the years, the university now offers 35 undergraduate degree programs,nearly 60 master’s degree programs and 22 doctorate programs. Two MBA programs are currently offered: a full-time MBA; and an Executive MBA, both of which are accredited by the Association to Advance Collegiate Schools of Business.

The Stevens Institute of Technology campus is located in Hoboken, New Jersey, on 55 acres overlooking the Hudson River. Interestingly, the Stevens campus encompasses the highest point — Castle Point — in Hoboken. At 100 feet, it affords stunning views of midtown Manhattan, including the Empire State Building.

The campus is about 20 minutes from Manhattan by car or 10 minutes by rail. Hoboken can be reached via any of the numerous major airports serving the New York area. A complex rail and bus system serves the area, as well.

Students in the Stevens MBA program may take classes from any of three locations, including on campus, online or even at their worksite, if their employer has an arrangement with Stevens.

Stevens MBA students take classes primarily (but not exclusively) in the Lawrence T. Babbio, Jr. Center for Technology Management, a six-story, 95,000 square foot building that opened in the Spring of 2006. The lower four levels of this glass-encased, modern building are anchored by an atrium lobby, which is surrounded by classrooms, laboratories and a research library.

Students in Stevens MBA programs are served by 60 full-time faculty members as well as additional adjunct and emeritus faculty members. Many faculty members are former Fortune 500 business members who are well-respected in their fields. Others are careful researchers. All understand how to apply classroom learning to real-world, workplace problems.

About 430 students study in Stevens’ MBA programs at any given time.

Stevens offer a traditional MBA as well as an Executive MBA. 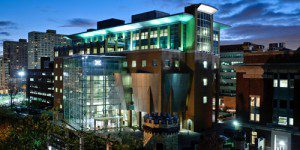 All Stevens Institute of Technology School of Business News »