Let’s explore some of the most interesting stories that have emerged from New York City business schools this week.

The Baruch College Zicklin School of Business knocked it out of the park in the recently revealed U.S. News & World Report  “2019 Best Graduate Schools” list. The full-time MBA ranked 55th nationwide (moving up two spots from the previous year), 29th nationwide among public institutions, first among public institutions in both NYC and New York state, 3rd in NYC overall, and 5th in New York State overall.

“Graduates of the Zicklin School of Business lead major businesses around the globe. Our student success is based on an ever-evolving curriculum that today includes data science and analytics, machine learning and cybersecurity along with experiential learning opportunities for real-world problem solving and strategic planning.”

Read more about Zicklin’s showing in the US News & World Report rankings here.

The findings came after the group surveyed roughly 2,000 “participants from online panels and United States and international MBA programs” that had, at one point, studied abroad.

Entitled “The Shortest Path to Oneself Leads Around the World: Living Abroad Increases Self-Concept Clarity,” the study reveals that “living abroad triggers self-discerning reflections in which people grapple with the different cultural values and norms of their home and host cultures. These reflections are helpful in discovering which values and norms define who people are and which simply reflect their cultural upbringing.”

You can check out the rest of the study here.

Goldman Sachs President and Co-Chief Operating Officer Harvey M. Schwartz used his recent Fordham Wall Street Council talk as an opportunity to discuss his unlikely journey from a post-high school gym employee to Wall Street innovator as he stands on the precipice of retirement.

“Innovation is present in financial services. I think that if you have an interest in solving complex problems for clients or specific areas of markets, there is a unique way to participate. The takeaway should be that if you work hard, people will invest in you.” 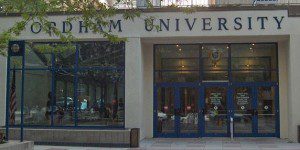