Founded in 1922, Loyola University Quinlan School of Business is the only Jesuit business school in Chicago. In 2012, the school was renamed for alum Michael R. Quinlan, former chairman and CEO of McDonald’s Corp., and former chairman of Loyola’s Board of Trustees, following his $40 million gift.

The school is accredited by the Association to Advance Collegiate Schools of Business International (AACSB).

The 10-floor school is located less than a mile from Chicago’s Loop, two blocks from the Magnificent Mile, and less than 20 miles away from the Chicago O’Hare International Airport.

Maguire Hall on Loyola’s Watertown Campus is Quinlan’s main facility. It is located at 1 E. Pearson Street in downtown Chicago and has an array of classroom and lecture spaces.

Quinlan has more than 110 full-time and part-time faculty members across seven departments.

There are currently 587 total students enrolled at the Quinlan School of Business, with over 55 percent female students and just under 44 percent male students.

Quinlan offers a traditional full-time and part-time MBA program in center city Chicago and in the northern Loyola Lake County suburbs. As well, the school offers an Executive MBA and dual MBA in Healthcare Management. 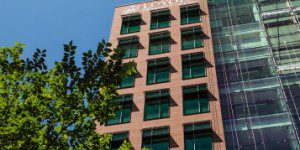