The business school at Washington University in St. Louis was officially founded in 1917, and began offering undergraduate degrees two years later. In 1950, the school began rewarding MBA degrees, and then in 1983 the school started offering Executive MBAs. Businessman and philanthropist John Merrill Olin’s foundation, the John M. Olin Foundation, awarded Washington University a sizable donation 1988, which renamed the business school in his honor years after his passing.

In 2002, the school partnered with Fudan University in Shanghai, establishing the school’s first international EMBA. Years later, the school also introduced the EMBA Mumbai in partnership with the Shailesh J. Mehta School of Management at the Indian Institute of Technology in Bombay.

The central campus of the Olin Business School rests at the heart of Washington University in St. Louis, just west of the city center on the border of Missouri and Illinois. The school campus, known as the Danforth Campus, can easily reached by the light rail system in the city from the St. Louis International Airport, located less than 10 miles northeast of the school.

The business school’s associated EMBA programs take place at Fudan University in Shanghai, China, and the Shailesh J. Mehta School of Management at the Indian Institute of Technology in Bombay, India.

Simon Hall, Knight Hall, and Bauer Hall are the centers for the Olin Business School, in addition to the Knight Center—the home of the school’s executive program. Nineteen total buildings on the Danforth Campus, better known as the Danforth Campus Historic District, are recognized at the National Register of Historic Places. In the early 20th century, the original style of the school was crafted by Philadelphia’s Cope and Stewardson firm, which modeled the campus in an American Gothic style in the mold of Oxford and Cambridge universities.

Olin has 78 tenured or tenure track members, 20 full-time lecturers, and 37 adjunct lecturers, in addition to other visiting and emeriti faculty.

The most recent Olin Business School full-time MBA class featured 135 total students. The average age of the class is 28. Students joined the full-time MBA with a 693 GMAT score, 4.1 years of work experience, and a GPA of 3.47. About 42 percent of the class are female students, 31 percent are international students, and 22 percent are underrepresented U.S. minorities.

There are 89 Olin Professional MBA students that are, on average, 31-years old. They have around 6.5 years of work experience, a 3.27 undergraduate GPA, and an average GMAT of 602. Women make up about 33 percent of the class.

The school’s EMBA US class features 44 students that are, on average, 40-years old. They join the program typically with 15 years of total work experience and eight years of management experience. Women make up about 40 percent of the class.

The EMBA Shanghai usually features 50-55 students that are, on average, 38-years old. The number of EMBA Mumbai students is similar, and students have about 15 years of work experience prior to enrollment.

The Olin Business School offers a traditional, full-time MBA, a part-time Professional MBA, and three iterations of an Executive MBA, offered in the U.S., China, and India. 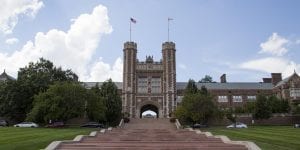