The University of Dayton was established in 1850 in the Society of Mary, a Roman Catholic Marian Society, better known as the The Marianists or Marianist Brothers and Priests, in Dayton, Ohio. The 125-acre land that eventually became the campus of the university was originally purchased by the trio of Maximin Zehler, Charles Schultz, and Andrew Edel from farmer John Stuart in 1849, opening the St. Mary’s School for Boys just one year later. Attendance at the university had ballooned from 16 students to nearly 100 before the beginning of the American Civil War, in which the school began provided college preparation courses. Three centerpieces to the university—Zehler Hall, Immaculate Conception Chapel, and St. Mary’s Hall—were completed by 1870. The school began offering official collegiate degrees in 1882.

The campus is located less than 20 miles from the Dayton International Airport.

The Dayton University School of Business Administration offers a traditional, full-time MBA program, the online MBA@Dayton, and a Master of Finance and a Master of Professional Accountancy. 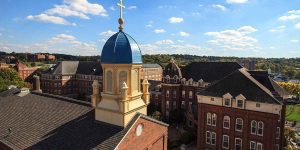