Whether it’s Giants vs. Eagles or the Statue of Liberty and the Liberty Bell, New York City and Philadelphia are two cities famous for being at odds with one another.

Putting these cultural and historic differences aside, however, and you’ll find common ground between the Mid-Atlantic’s biggest cities: Both metros are known as top locations for prospective MBAs looking to earn an advanced business degree full-time.

Like the cities themselves, the full-time MBA offerings in New York and Philly have their differences and similarities. We’ll take a look a handful of top programs in both metros and breakdown how the programs and cities compare to each other.

New York is, in a word, immense. Easily the most bustling city in the country, NYC is also the capital of the business world. More Fortune 500 companies are headquartered here than in any other city. The Big Apple is not only home to Wall Street and the world’s largest financial institutions, but also massive media, marketing, and advertising companies. However, New York is an enormous city and expensive to live in, so it may not be for everyone.

Located about 100 miles south on I-95, Philadelphia has a reputation of being the gritty younger sibling of New York. Affectionately known as the City of Brotherly Love, Philly is a big city with a smaller town feel, though many of the city’s business operate in the bustling Center City district. In South Philadelphia, the Navy Yard has also developed in a thriving business center, housing companies like URBN and GlaxoSmithKline. Philly is smaller than New York, more car and commuter friendly, and has a more affordable of living.

The NYU Stern School of Business curriculum gives students plenty of flexibility, allowing MBAs to choose up to three specializations from more than 25 options. Each specialization requires three to five courses to complete. Students can also earn credits by participating in the curiously titled Stern’s Doing Business In… (DBi) programs—intensive study abroad experiences offered between semesters.

The Fordham University Gabelli School of Business MBA curriculum was redesigned in 2014 to better meet the needs and expectations of the current job market. The streamlined 60-credit full-time program takes two years to complete and follows a cohort structure.

At the prestigious Columbia Business School, 37 percent of full-time MBA of graduates were employed in the financial services industry with 16.3 percent employred in investment banking. About 35 percent of the class joined the consulting industry, while almost eight percent pursued manufacturing, and the technology industry employed approximately ten percent of graduates. The median starting salary was $125,000.

MBA students at the Zicklin School of Business may design their own course of study or choose up to two majors. Potential majors include: Decision Sciences, Industrial/Organizational Psychology, Information, Taxation, Management/Entrepreneurship, and Management/Sustainable Business. As an alternative to completing a major, students may pursue a joint JD/MBA in conjunction with Brooklyn Law School or New York Law School.

Philadelphia, on the other hand, is home to the first university ever established in the United States and the country’s first-ever medical school. As far as business schools go, full-time MBA offerings in Philadelphia include:

The Temple University Fox School of Business features international campuses in Italy, Japan, and London. Students can travel to either campus based on their field of interest. For example, students interested in media and communications can study in London while those interested in business can attend school in Singapore.

La Salle University full-time MBA students can chose to specialize in Accounting, Finance, Management, Business Systems, Marketing, or General Business Administration. Students who major in Accounting, Finance, Management, or Marketing may be required to attend some classes at the Bucks County or Plymouth Meeting locations depending on their course selections.

Graduates of the Drexel University LeBow College of Business full-time MBA program are often successful finding local employment. Among recent graduates, nearly 71 percent find work in the Philadelphia area. About 22 percent of graduates are employed in the financial services industry, while 13 percent work in healthcare, 10 percent in media, and eight percent in education.

The University of Pennsylvania Wharton School introduced a new curriculum to its full-time MBA program in 2012. Students must take six required core courses in August and the first half of their first year with a cohort of about 70 students and a “learning team” of five or six classmates. Flexible core courses can be delayed until the second year, which gives first year students the opportunity to begin personalizing their course of study by choosing electives early on in their MBA process.

The Ivy League Schools in New York and Philadelphia are expensive, as expected. The total expected cost for the Columbia full-time MBA is $99,824 for the first year and $103,007 for the second year. Similarly, the total cost estimate for one year at Wharton is $105,265 (the school’s full-time program lasts 20 months).

There are more affordable options in the two cities, however. Total tuition at the Zicklin School is $29,800 for New York state residents and $58,140 for non-residents and international students. In Philly, tuition paid over the course of the Drexel full-time MBA program totals $64,005.

When it comes to job placement, both Philly and New York have their perks.

New York is home to business school with the highest job placement rate. According to Business Insider, Columbia comes in at first overall with a 93 percent job placement rate. The publication notes that students, “begin crafting their network and community within the business world the minute they arrive at Columbia, thanks in part to the school’s cluster system, which places first-year students in “clusters” of 65 to 70 people who take all their core classes together. Columbia also counts some of the greatest minds in finance among its alumni, including Berkshire Hathaway CEO Warren Buffett and former Bank of America executive Sallie Krawcheck.”

Meanwhile, the Philadelphia Business Journal’s list of Top Fifty Highest Paying Jobs in Philadelphia shows salary levels that Philly professionals can expect with an MBA degree. For a city with a lower cost of living than places like New York or Washington DC, some local job offerings feature healthy salaries, including:

While New York and Philadelphia have their differences, both are top destinations for prospective MBAs. With tons of top-notch programs and two of the finest cities one could ever want to live in, these metros stand out when it comes to full-time MBA offerings. 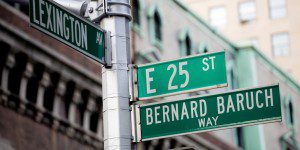