For the first time ever, the Wharton School at the University of Pennsylvania topped the biennial Forbes list of the best business school’s in the United States.

Coming in second place on the Forbes 2017 rankings, revealed earlier today, was the Stanford Graduate School of Business, which was followed by Harvard Business School, Northwestern’s Kellogg School of Management, and Dartmouth’s Tuck School of Business rounding out the top five. 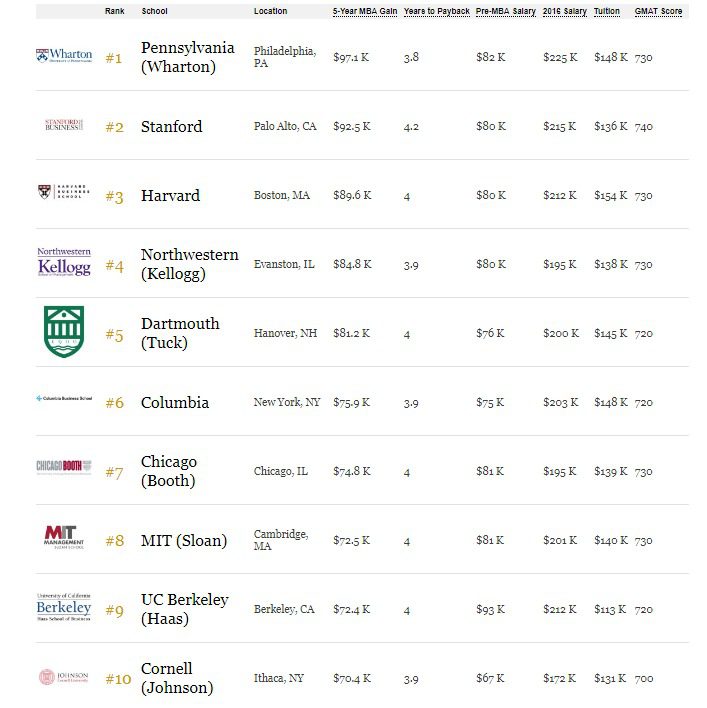 Method To The Madness

Nearly every major publication that reveals its own respective business school ranking list has its own principle methodology in which it follows. For instance, unlike Forbes, the Financial Times ranking system relies more on alumni survey responses for its final ranking. While Forbes does utilize surveys in its ranking, its primary focus is on how graduates fare on their return on investment.

“Our ranking of business schools is based on the return on investment achieved by the class of 2012. We examined more than 100 schools and reached out to 17,500 alumni around the globe. We compared graduates’ earnings in their first five years out of business school to their opportunity cost (two years of forgone compensation, tuition and required fees) to arrive at a five-year MBA gain, which is the basis for the final rank. Schools whose alumni had response rates below 15 percent or a negative return on investment after five years were eliminated.”

In regards to Wharton topping the 2017 list, Badenhausen writes, “These days most Wharton MBA students head to finance or consulting jobs upon graduation (79 percent of the class of 2012), which traditionally are the most lucrative areas for MBAs. The concentration in these sectors pushed Wharton’s current total compensation for the class of 2012 to the highest of any school in the world at $225,000.”

The exceptional cost of living around Stanford and shockingly low admissions rates (6 percent) contributed to the business school falling off its top spot from the prior year. Stanford GSB graduates, however, were given enormously valuable stock options after earning employment, with a median value of $380,000. Despite the astronomical figures, Stanford GSB grads still saw a dip of around $40,000 in total five-year compensation compared to the Class of 2010. Similarly, HBS grads saw a $28,000 five-year drop compared to the Class of 2010. Wharton 2012 grads, in contrast, gained $18,000 compared to two years prior.

In regards to employment, not much has changed since 2012. McKinsey and Co. was the top employer of the Wharton Class of 2012, hiring over 50 of the school’s 800-plus graduates. Alongside McKinsey were Bain, BCG, and Deloitte, which are still the school’s top employers. However, since then, Amazon has overtaken Goldman Sachs in the Wharton recruitment war.

Thomas Jueng, Seoul native and 2012 Wharton grad, tells Forbes, “Wharton was a great springboard to make a transition geographically and job position-wise with a strong brand name and network as well as providing practical knowledge.”