Starting a Business Straight Out of School? How HBS Supports Student Entrepreneurship

This coming weekend, Harvard Business School (HBS) will host an annual Entrepreneurship Conference sponsored by its own homegrown Entrepreneurship Club. The conference brings together hundreds of participants including “founders, joiners, and venture capitalists,” all of whom hope to connect through a smorgasbord of lectures, panels, chats, and networking sessions.

This year’s conference, scheduled for Saturday, March 31, is expected to draw more than 500 participants, including many top professors and professionals holding court on a variety of topics. Three keynote lectures will be given by CEOs and founders from Catalant Technologies, Strava, and edX. Strava’s Michael Horvath, who is also a professor of entrepreneurship at Dartmouth’s Tuck School of Business, will share his experiences having held several high-level roles at multiple startups.

Tuck Professor and Strava Co-Founder Michael Horvath will give one of the Entrepreneurship Conference’s keynote addresses.

In addition to the keynote lectures, the conference is also stacked with nine different panels. Some will include general discussions on topics such as starting a business during your MBA program and financing your startup. Others are more specific, covering some of the hottest fields in entrepreneurship right now. Examples of these include “Blockchain: The Next Transformative Technology?” and “AI/ML: Artificial Intelligence in Diverse Contexts.” Finally, attendees will also get to take part in a venture capitalist meet-and-greet and a networking lunch and cocktail hour.

HBS is extremely supportive of entrepreneurship, according to Jim Aisner, the school’s director of media and public relations. He spoke at length about the myriad ways in which HBS is a fantastic place for both seasoned and budding entrepreneurs, underscoring the range of support Harvard’s large entrepreneurial community offers to those looking to start their own businesses.

“Entrepreneurship is a major component of life at HBS, with some 35 faculty members doing research, course development, mentoring/advising, and teaching in this area,” Aisner told Clear Admit.

Harvard’s program requires all first-year MBA students to take an entrepreneurship course, and there are also a large number of entrepreneurial-focused electives on offer in the second-year Elective Curriculum. In addition, the school boasts multiple conferences and events that reach programs outside the business school. “There is a whole ecosystem [at Harvard] promoting and nurturing entrepreneurship,” Aisner notes.

HBS is also home to the Arthur Rock Center Accelerator, which helps selected teams develop their ventures over the course of the year. In addition, the Rock Accelerator offers summer fellowships to support students from the entire student body who seek to develop entrepreneurial ventures during the summer and hosts a semiannual conference that brings 100 alumni back to campus each year.

Rock Venture Partners is a program that lets small groups of students learn more about investing in startups by supporting Rock Accelerator teams as they go through pitching and starting their ventures. Then there is the Harvard Innovation Lab, or i-lab, a resource available to current students at any Harvard school interested in exploring innovation and entrepreneurship at any stage. “The Innovation Lab creates a hotbed of cross fertilization for teams from across the university,” says Aisner.

Given this supportive environment, it won’t come as a shock that many HBS students decide to start their own businesses rather than pursue a more traditional career path in their post-MBA life. Out of more than 900 students, eight percent of graduates from the Class of 2017 chose to start their own businesses upon graduation, up from six percent in the Class of 2016. Although this growth is indicative of a national trend toward more and more recent MBA grads founding startups, HBS outperforms many top schools in this regard. By comparison, at Chicago Booth just 3.2 percent of 2017 MBA grads went immediately into running their own startups. Meanwhile, at the University of Pennsylvania’s Wharton School, just 2.3 percent of the most recent graduating class founded businesses.

As another indicator of its commitment to fostering entrepreneurship, HBS will host its annual New Venture Competition on April 18th, which bestows more than $300,000 in prize money to outstanding new ventures. Contestants may apply in either the business track, with ventures that drive substantial market value, or the social enterprise track, with ventures that drive social change. This recent Clear Admit article noted that the social enterprise track received 69 entries this year, more than ever before.

Nationwide, more and more students have begun to pursue startups at all stages of their MBA careers. From this weekend’s student-led Entrepreneurship Conference to the wide range of related centers, faculty, and other support, HBS’s investment in nurturing its entrepreneurial students is clear. 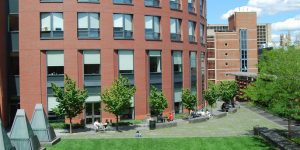