It seems puzzling to say a company that is worth nearly half a trillion dollars is venturing somewhere near zero degrees Kelvin, but if you were only reading headlines this week you’d get the sense that Facebook isn’t looking so hot.

Since the break of the Cambridge Analytica scandal, the tech giant lost an estimated $100 billion USD in value, and its beleaguered founder Mark Zuckerberg lost an estimated $14 billion of his own worth. Fortunately for him, according to CNN, he’s still worth over $60 billion so he can easily afford more mayonnaise and butter sandwiches.

But the fallout is more than monetary. Trust in the social media company is at a critical low point, according to Statista data. 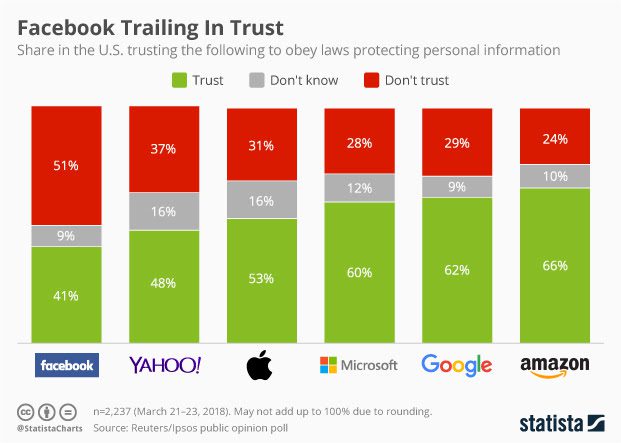 Janina Conboye at the Financial Times recently asked how the company may go about repairing its own image in “The MBA view: can Facebook fix its reputation?,” speaking with numerous business school faculty members, including London Business School‘s Jill Schlechtweg, who plainly says, “It is worth wondering whether Facebook can regain credibility at all. Arguably Mark Zuckerberg has evaded responsibility for the social costs of social media addiction, the proliferation of fake news, and now leaks of personal data for political ends.”

Check out how other business schools and industry experts are reacting the ongoing Facebook story below.

What @facebook knows about you apparently includes data about phone calls and messages. The revelation could make Facebook’s huge data scandal hurt more than ever. https://t.co/jActrbEB5i

PSA: “Harvard Business School Prof. Shoshana Zuboff calls it “surveillance capitalism.” And as creepy as Facebook is turning out to be, the entire industry is far creepier. It has existed in secret far too long…” https://t.co/vSPlAyWnzu

In the wake of the Cambridge Analytica scandal, Apple is making their position clear on privacy. https://t.co/OLIl5ihtby