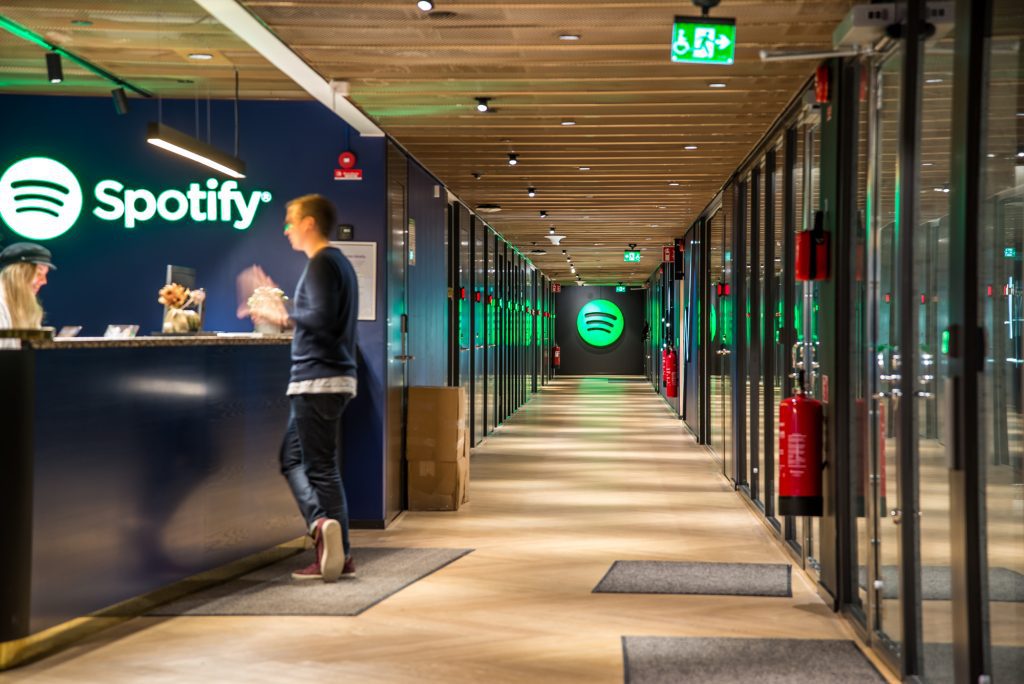 Ten years in, Spotify’s business model—a combination of premium paid access and “freemium” ad-based access—miraculously legitimized the Napster template to the tune of enormous profits. To make matters complicated, the Swedish company’s resounding success has been a major source of controversy among musicians whose life’s work the platform is built on.

When Spotify shared its year-end round-up metrics late last year, one image made the social media rounds that compared the company’s annual revenue of $1.37 billion to the 1,117,021 streams required for an artist to make minimum wage and a $0.0037 average per-stream royalty.

One might now understand why many high-profile musicians, like Prince, The Beatles, Taylor Swift, and Neil Young, initially refused to stream their music on Spotify. The composer and harpist Joanna Newsom disparaged Spotify in a 2015 LA Times interview as a “villainous cabal of major labels … built from the ground up as a way to circumvent the idea of paying their artists.”

But the platform’s growing power and presence have coerced musicians to play ball, even if they are reluctant to do so. Whether Spotify’s overall operating structure and approach to content distribution is viable for the long-term remains to be seen.

For MBAs looking for a way to help musicians from inside the belly of the beast, let’s take a look at employment at Spotify.

Known for its constant intake of employees, Spotify maintains several divisions and publishes both job openings and internship opportunities. Employees report that internal referrals, stand-out experience and direct engagement are the best way to get hired.

Spotify’s HR team reports receiving hundreds of thousands of resumes each year. So, an early career MBA’s best bet at landing a permanent position may be to secure an internship. Seasoned business leaders would do well to draw the attention of Spotify’s Acquisition Team.

According to Paysa, a comprehensive salary comparison tool, those in product management roles at Spotify can expect to earn salaries that average more than $190,000 per year. Even the rough average salary for the company, regardless of position, is about $125,000 per year (below).

Internships are offered in various academic formats alongside occasional graduate and training opportunities. As an intern, Spotify claims, “You’ll be right at the heart of major projects, working with teams of passionate people to create the next awesome thing.”

Spotify places interns at its office locations around the world. These positions tend to be highly competitive so it may take some creative maneuvering to get your foot and nail the interview.

Former intern Andrea Tiutan explains, “I knew that researching and understanding my future hiring managers would help me cater my answers to their interview questions to what they wanted to hear. All this would also help me know how to present my market research project in the most compelling way.”

In a 2017 blog post, Spotify’s Talent Acquisition team head, Fredrik Johnsson, explains how Spotify recruiters are evaluated based on finding successful matches to the company’s needs, rather than the traditional metric of number-of-hires:

“I focus on letting my managers evaluate the behaviors I need in my team. I need courageous team players, people who act as true talent acquisition partners to the organization and who I can trust to take the hiring decisions that are right for the company in the long run.”

If Johnsson’s approach rings true, experienced MBAs would be wise to clearly frame how their own expertise and leadership aligns with Spotify’s specific needs.

In terms of how to get in front of recruiters, Johnsson explained in a 2018 post that his team team uses LinkedIn’s Talent Insights as a search tool.

Spotify is known for its decentralized leadership structure and consensus-oriented decision-making. Some employees report that this, in combination with suboptimal HR practices and ineffective middle management, makes both the impact of their work and opportunity for advancement a challenging prospect.

On the other hand, some employees report that they appreciate the community of peers, benefits, and work-life balance the company offers. With Spotify’s recent announcement that it plans to further expand both its operations and market reach, now may be an optimal time to grab a seat at the table. That is, of course, for those willing to take on both the good and the bad with one of the world’s highest-profile businesses.