Financial Times 2019 Executive Education Rankings: What You Need to Know

However, beyond that, there were some surprises for the top five schools on each list with five programs rising sharply.

IESE ranks first for the fifth year in a row in the annual FT Executive Education rankings.

The top 90 customized Executive Education programs refer to those programs that offer “custom” programs developed for corporate clients. Beyond the top three programs (IESE, Duke, and IMD), which have remained relatively steady over the last three years, the fourth and fifth-ranked program made some considerable leaps to reach the top.

SDA Brocconi, fourth overall, had dropped down to seventh place in 2018. Its re-emergence in the top five harkens back to 2017 when it last reached the same level.

As for fifth-ranked Essec Business School, 2019 is the school’s first time in the top ten. In 2018 it was ranked 12th, and in 2017 it was ranked 17th. Its quick rise can be attributed to improvements in facilities, value for the money, follow-up, and growth—all of which increased by more than 11 points.

The top 80 open Executive Education programs refer to those programs that offer open-enrollment for any candidate interested in Executive Education. Beyond the first ranked IMD and fifth-ranked INSEAD, the remaining top three programs all made great strides to find themselves in the top five this year.

The most significant jump belongs to Stanford Graduate School of Business, which tied IMD for first place this year. That’s a thirteen-place jump from 2017 and seven-place jump from 2018. The sharp rise over the last two years, according to Dean Jonathan Levin, was due to a variety of reasons. Levin tells The Financial Times, “Our programs offer a really immersive experience for participants, a chance to connect with faculty, each other, get exposed to a whole new set of ideas and up to date with what’s going on in the world.”

In second and third place, respectively, are University of Chicago’s Booth School of Business and University of Michigan Ross School of Business. For both schools, it’s their first time in the top five. For Booth, in particular, it was a leap from placing 19th in 2017 and 8th in 2018. The increase for Ross was a little more gradual moving from 9th in 2017 to 6th in 2018.

So, what can you take away from this year’s 2019 Executive Education rankings from The Financial Times? There are a few things to pay attention to.

For customized programs, you want to look outside the US. Only two of the top ten customized EE programs are at U.S. schools, and while IESE Business School offers a U.S.-based option, the main program is located in Spain. There’s also only one program outside of Europe and the U.S., 8th Fundação Dom Cabral, which is ranked best for facilities thanks to its beautiful campus in Nova Lima, Brazil. The critical thing to realize is that international participants are the most elite providers of customized Executive Education.

IMD is the top-ranked open Executive Education program for the eighth year in a row. The school continually does well for the diversity of its faculty, high-performance leadership programming, and class profile.

At the same time on the customized EE side, IESE ranks first for the fifth consecutive year. The school takes the top spots for positive reviews from client companies, new skills and learning, aims achieved, and value for the money.

Over the past few years, Executive Education has become increasingly competitive and diverse. According to Unicon, a network of over 100 business schools around the world, EE generates $2 billion in annual fees and is growing by about 6 percent annually. There’s also been quite a bit of growth in rival training courses offered by firms such as McKinsey and PwC.

It’s important to remember that moves up or down on either list, by only a few slots, may not hold much significance. Considering that student and company surveys determine 80 percent of the rankings, there’s a chance that the type or number of participants could change enough year-to-year to drastically affect rankings, even if the program remained relatively unchanged.

The customized FT ranking compiled data from business schools and their corporate clients. Overall, the survey interviewed around 1,100 business school clients. Each survey rated programs on a ten-point scale according to a range of criteria including course design, follow-up, and future use, which accounts for 80 percent of the ranking’s weight. The last five criteria included information provided by the schools such as international clients, overseas programs, growth, partner schools, and faculty diversity.

The open-enrollment FT ranking compiled data from course providers and students. Around 6,800 students responded this year rating schools on a 10-point scale. Responses covered ten criteria, including the quality of the participants, teaching, and relevance of skills. This made up 80 percent of the ranking. The final 20 percent went to the school’s course submissions and survey. 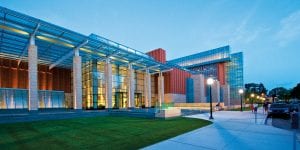