The Stanford Graduate School of Business is no stranger to a top spot, but this is their first time claiming top honors on the Bloomberg Businessweek Best B-School list for U.S. programs.

There are more familiar faces in the lead, with Wharton holding steady in second and Harvard Business School placing third. MIT Sloan and Chicago Booth round out the top five, and then some greater shake-ups hit the standings. Berkeley Haas jumps five spots from 2017 and UVA Darden moves up a whopping eight positions. This can be attributed to Bloomberg Businessweek’s change in methodology—which was such a departure from last year’s approach, that they did not even include prior rankings for comparison.

Bloomberg Businessweek changed its methodology to let schools help determine the ranking components and survey respondents determine the weighting of those components. This meant that areas like “compensation” and “networking” won big, representing over 66 percent of the determination of final ranking. “Learning” and “entrepreneurship” comprise just 34 percent of the total.

The compensation category covers the gamut of pay: from the time of graduation to further along in alumni’s careers; employment security within three months; how many received a bonus; and the scale of the bonuses. When considering the influence of networking, Bloomberg Businessweek accounts for brand and effectiveness of relationships among students, alumni, career services, and recruiters. Under the umbrella of learning fell means of instruction, value placed on innovation, problem-solving, strategy, and real-world relevancy. Class size and collaboration also played a role in that category. Though only 10.5 percent of the overall assessment indexes, entrepreneurship held sway over a few programs, with students, alumni, and recruiters weighing how well a program prepared them with related skills.

2) Potential Impact of the New Methodology

The changes to the methodology result in an entirely different ranking—so different that Bloomberg Businessweek isn’t even providing the usual comparison data (to the prior ranking) as they have done in the past. Some of the changes are so puzzling that they may cause pundits to label the Bloomberg ranking as less traditional and more oddball.

3) Stanford GSB—Top of the Pops

Stanford surged from 5th last year to capture the top spot—an honor the school has never earned in the history of the Businessweek ranking.  This is due to the school’s strengths in compensation, networking, and entrepreneurship (all areas where the school scored a perfect score of 100). The school’s location in Silicon Valley cannot be ignored in this instance. 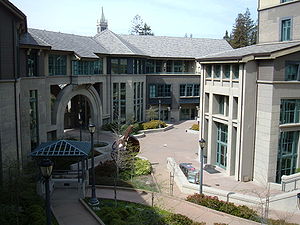 Berkeley Haas Sails up the Chart

4) Berkeley Haas Sails up the Chart

Berkeley’s Haas School of Business lands at 6th on the list (moving up from 11th last year), besting the likes of Northwestern Kellogg, Columbia Business School, and Dartmouth Tuck (each of which ranked higher than Haas last year). This ranking suggests that the Bay Area school is increasingly pushing its way into the M7 and is benefiting from geography, just as Stanford has.

5) Tepper and Marshall Make Some Noise

Schools like CMU Tepper (12th) and USC Marshall (13th) should be very pleased with its showings. Tepper moves up a couple of slots from 14th last year, and USC Marshall rockets from 30th to 13th, passing Los Angeles rival UCLA.

6) There’s Only So Much Room at the Top

On the downside, Dartmouth Tuck slips from 7th last year to 19th this year, and Duke Fuqua fell from 6th to 15th.  This may especially puzzling for Tuck, an Ivy League MBA with a close-knit community and incredibly supportive alumni community. However, it may have to do with the school’s low marks in both “learning” and “entrepreneurship.” It’s also worth noting that Tuck has traditionally been viewed as being right on the cusp of the M7. And yet, this ranking has relegated the school to the back end of the top-20.

Bloomberg Businessweek promises a global ranking on December 11, so stay tuned for more!

This article has been edited and republished with permissions from its original source on Clear Admit.

Lauren Wakal has been covering the MBA admissions space for more than a decade, from in-depth business school profiles to weekly breaking news and more.