Where Should I Work: Apple vs. Samsung 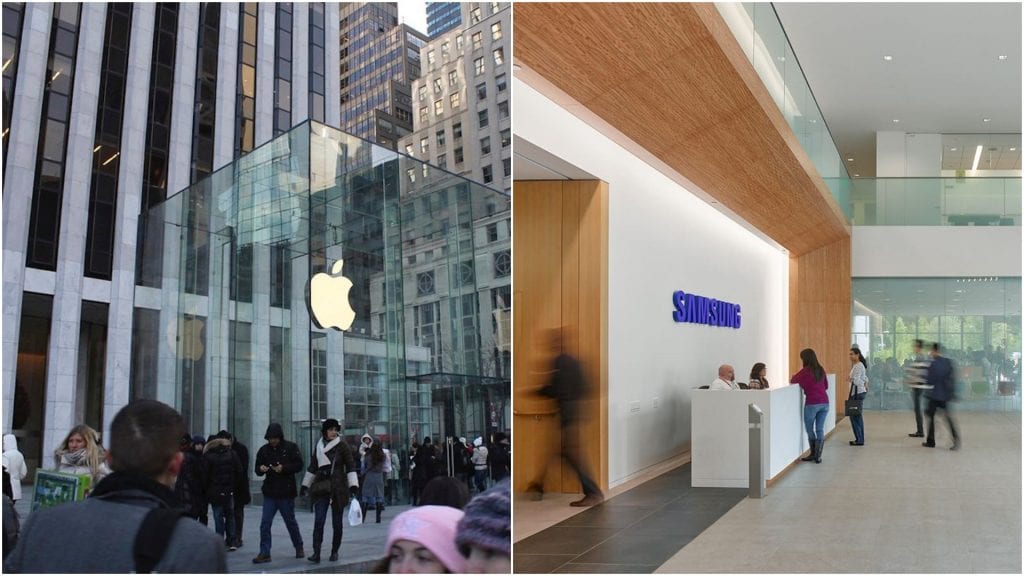 Apple and Samsung are two of the premiere mobile phone and technology companies in the world. But from the outside, it may be tough to gauge what sets them apart as employers.

Apple, the world’s most valuable technology company, pulled in $260.17 billion in revenue in 2019. It employs 132,000 people worldwide, operating over 500 retail locations in 24 countries. However, despite its lofty value, Glassdoor ranks Apple 84th in its 2020 list of “Best Places to Work” list.

Founded in 1938 in Seoul, South Korea, Samsung is a multinational conglomerate specializing not just in mobile technology, but in apparel, motor vehicles, chemicals, electronic and medical equipment, appliances, and telecommunications, among others.

The company sits a few places behind Apple in terms of overall value, landing 15th overall on the current Fortune 500 list. Last year, Samsung accrued $221.5 billion in revenue while employing more than double the amount of employees of Apple; over 300,000 worldwide. Unlike Apple, however, Samsung doesn’t even appear in the top 100 of the aforementioned Glassdoor 2020 “Best Place to Work” list.

Below, we took a closer look at both companies to help you make a more informed decision about where to work: Apple or Samsung?

When interviewing at Apple, be prepared for several rounds of interviews, including a large group interview. According to Indeed, the majority of applicants experienced an interview process length between two weeks and one month.

The Samsung interview process, in comparison, is completed relatively quickly. According to Indeed, the majority of applicants completed the process in under one week.

Indeed reviews of compensation at Apple indicate salaries ranging from $130,186-$192,237 for top tech positions. About 71 percent of employees who left reviews felt they were compensated fairly for their work. Benefits at Apple include a 401K plan, dental, vision, health, and life insurance, as well as numerous employee discounts.

Both Apple and Samsung have received extensive public criticism for company culture and labor practices.

Compared to other companies of similar stature, Samsung employees ranked their overall experience at the company very poorly. According to Glassdoor, only 38 percent of employees would recommend working at the company to a friend. Samsung CEO approval rating is currently at 50 percent.

Samsung supports research and the opportunities that can grow from innovative ideas. The Samsung Research operates a Creative Lab Program to support employee ideas and provides funding and consultation to further develop creative solutions for the future.

Apple accepts around 56 percent of online applications, opening doors to individuals without a previous connection to the company. About 15 percent of applicants were recruited through employee referral.

According to Glassdoor, individuals who apply online at Samsung receive a follow-up interview request at a rate of 33 percent. Campus and other recruitment efforts bring in 31 percent of interviewees follow by 22 percent by employee referral.