In 1969, the University of Ottawa business school was originally founded as the Faculty of Management Science. Less than ten years later, in 1977, the school was effectively re-organized as the Faculty of Administration. Part of the remodeled structure saw the elimination of departments with individual programs acting in place, preceding the business school offering the domestic, international, and Executive MBA programs. In 2002, the school was renamed again as the School of Management. Finally, in 2007, MBA alumnus Ian Telfer donated $25 million to the business school, prompting a name change to the Telfer School of Management.

The school was accredited by the AACSB in 2003. Four years later, it earned an EQUIS accreditation.

The Telfer School of Management at the University of Ottawa is located about 16 kilometers north of the Ottawa International Airport, just off the border of the Ottawa river between Ontario and Quebec.

The central home of the Telfer School of Management, located in the Northeast section of the University of Ottawa, is the Desmarais Building, which houses classrooms, lecture halls, and labs. The building is located on the corners of Laurier Avenue, Waller Street, and Nicholas Street.

There are around 100 total faculty members at the Telfer School of Business.

The GMAT average of the most recent Telfer School MBA class was 612, scoring in the range of 570–770. About 25 percent of the class is international.

The Telfer School of Management offers a traditional full-time MBA degree and an Executive MBA degree, in addition to numerous other Masters degrees, a Bachelor of Commerce program, certificates, and a Ph.D. in Management program. 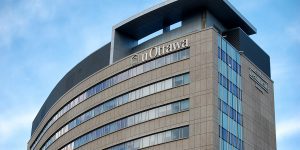