Vancouver Island University originally opened its doors in 1936 as the Dominion Provincial Youth Training Centre, teaching auto mechanics. In the late 1960s, it was renamed as the Malaspina College, named for famed Vancouver Island explorer Captain Alessandro Malaspina. In 1988, after a government initiative to expand secondary education in the area, Malaspina College (along with four other local community colleges at the time), began offering undergraduate degrees. After continued years of expansion, the college was officially transformed into a university in 2001, as the Malaspina University-College. Soon after, it began offering graduate degrees, including its MBA program. In 2008, the school’s name was officially changed again to Vancouver Island University.

The main campus is located on the coastal city of Nanaimo, British Columbia; less than 15 kilometers northwest of the Nanaimo Airport.

The student body of Vancouver Island University is around 14,400 in total, with over 1,000 students enrolled in its graduate programs.

Vancouver Island University offers a standalone MBA program and an MBA/MScIM dual program in partnership with the The University of Hertfordshire. 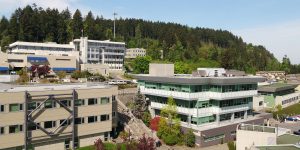