The original Simon Fraser University School of Business, founded in 1965, offered the first Executive MBA in Canada as early as 1968. After instituting a BBA program in the early ’80s, the school went through the first of a series of name changes, becoming the Faculty of Business Administration. At the end of the ’80s, SFU opened the new campus in the downtown Vancouver financial district. Decades after campus and degree expansions, and earning an AACSB and EQUIS accreditation, the business school was gifted a $22 million gift from Ryan and Keith Beedie, prompting the school to officially rename in 2011 as the Beedie School of Business. Five years later, alumnus Charles Chang donated $10 million more to the school, creating the Charles Chang Institute for Entrepreneurship.

The Segal campus is about 15 kilometers north of of the Vancouver International Airport.

The school’s MBA programs are located at the SFU Vancouver and SFU Surrey campuses. SFU Vancouver campus features the 60,000 square-foot Segal Building, originally built in 1916. It first housed the Bank of Montreal, but has since been renovated and expanded to house the business school.

The full-time MBA class at the Beedie School of Business earned an average GMAT of 620 and have five years of previous work experience. The average age is 29, with 52 percent female students and 48 male students. 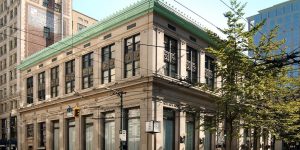