HEC Montréal, part of Université de Montréal, was founded in 1907 and is the oldest graduate school of management in Canada. In the late 1960s, the now tri-lingual Bachelor’s in Business Administration (BBA) replaced the baccalauréat ès sciences commerciales degree, and the licence ès sciences commerciales was replaced by the MBA program. Two years later, the first of 21 certificates are introduced at the business school and the 2nd on-campus building, 5255 Decelles, is opened. Only a few years later, the school introduced the Ph.D. in Administration and the MSc in Administration.

After decades of continued academic expansion, the school opened what is now its current home in 1996, the Côte-Sainte-Catherine. In 2007, on the 100th anniversary of the school’s opening, the EMBA program was introduced.

The main HEC Montréal campus is located just north of the St. Lawrence River, west of downtown Montréal. The main campus is located less than 16 kilometers from the Montréal-Pierre Elliott Trudeau International Airport.

Most of the MBA courses and administrative offices are held at the Côte-Sainte-Catherine building and the Decelles building. In 2021, the school plans to open new building in the a Ville-Marie borough. 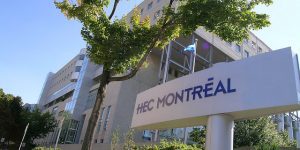