In 2005, Marcel Desautels, the President and CEO of the Canadian Credit Management Foundation and former President of Creditel of Canada, donated $22 million CAD to the university through the nonprofit Canadian Credit Management Foundation (CCMF). In 2008, he donated another $10 million to the school to establish the Marcel Desautels Institute for Integrated Management.

The main campus of the Desautels Faculty of Management at McGill University is located in Québec, Canada. The school also offers an international MBA program in Japan, offered in the Nishi-Shinjuku district in Tokyo. Desautels’ main campus is about 21 kilometers east of the Montréal-Pierre Elliott Trudeau International Airport.

In 1972, the school opened the Samuel Bronfman Building—the central hub of the Desautels Faculty of Management, located on Sherbrooke Street in Québec. However, the recently-opened Armstrong Building acts as the central home for the MBA program and other Specialized Masters programs. The school is currently in the process of constructing the Bensadoun School of Retail Management, which will host programs specializing in the retail industry for BBA and Ph.D. students.

Currently, 110 professors teach across the eight research centers and institutes at the Desautels Faculty of Management.

A typical cohort in the McGill University Desautels Faculty of Management MBA class features between 70-90 students, featuring 30 percent female students. MBAs at Desautels are usually 28-years old and have five previous years of work experience. Over 30 countries are represented by the current student body.

In total, there are 250 MBA, EMBA, and MM students at Desautels.

The Desautels Faculty of Management offers a traditional two-year MBA, a Professional part-time MBA, an Executive MBA, a Law MBA, an MD/MBA, and the MBA Japan degree offered in Tokyo. 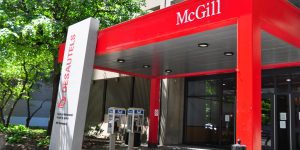