Business classes began at Western University under the Faculty of Arts in 1922. In the fall of 1948, they established Canada’s first MBA program. By 1950 The School of Business Administration was established as a separate faculty at Western and they issued their first MBA degree. It wasn’t until 1995 that the university took the moniker Ivey School of Business. Today, they offer full-time graduate MBA and Executive MBA programs. Ivey School of Business is AACSB accredited and was ranked as the 10th best international full-time MBA by Bloomberg in 2016.

Ivey Business School is located in Canada and maintains an international campus in Hong Kong.

The Richard Ivey Building is 270,000 square feet and contains the following:

Ivey has off-campus classrooms in London, Ontario as well. The Spencer Leadership Centre is located a short distance from Western’s main campus and is home of Ivey’s Executive Education programs.

Ivey also teaches EMBA courses at the Tangerine Leadership Centre. The Centre is located in downtown Toronto’s business district in the Exchange Tower. This location has over 7,500 square feet of space which includes two tiered amphitheater classrooms, five boardrooms and 15 breakout rooms.

The Ivey Business School employs 100 faculty members. Of which, 87 are professors and 13 are lecturers.

The most recent incoming class at the Ivey Business School had about 144 students enrolled in the full-time MBA program. About 75 percent of the 144 students are male, with 25 percent female students. Roughly 71 percent of the class comes from Canada, with 29 percent international enrollment. The average age of the most recent class is 28, the average GMAT score is 667, and the average work experience prior to enrollment is around 4.8 years.

The Ivey Business school offers a full-time MBA degree, an Executive MBA, and an Accelerated MBA program. The Accelerated MBA is exclusively for graduates of Ivey’s HBA undergraduate program. 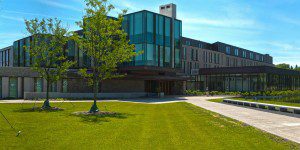