While Montreal’s Concordia University was not formally opened until 1974, the foundation of the Canadian university came in the late 19th century with the merger of merger of Loyola College and Sir George Williams University. The business school, formally entitled as Concordia’s Faculty of Commerce, was renamed as the John Molson School of Business in late 2000 after a donation from the Molson Family and the Molson Foundation.

The school is accredited by the Advance Collegiate Schools of Business (AACSB), the European Foundation for Management Development (EFMD), and the AMBA Development Network (ADN).

The John Molson School of Business is located in the southeast corner of Montreal, just east of Mont Royal. The central campus, located at 1450 Guy Street, about 18 kilometers east of the Montréal-Pierre Elliott Trudeau International Airport.

Courses in the MBA in Investment program are also taught in Toronto’s financial district, as well as the central Montreal campus.

Nearly 8,500 full-time and part-time students are enrolled in the John Molson School of Business’ undergraduate and graduate programs.

The school offers a full-time MBA, a part-time MBA, an Executive MBA, and an MBA in Investment 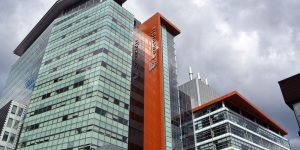