What Women Want in an MBA: Financial Aid and Flexibility

In honor of last Wednesday’s International Women’s Day, the Graduate Management Admission Council (GMAC) today released a new report entitled “What Women Want: A Blueprint for Change in Business Education.” For readers who may be too young to remember the 2000 romantic comedy also called “What Women Want,” it starred Mel Gibson as a chauvinistic advertising executive who suffers a blow to the head that renders him suddenly able to hear everything women around him are thinking. Though first instinct would be to assume that the two—Gibson’s rom-com and GMAC’s research—have nothing at all to do with one another, that’s not entirely true.

In fact, the aim of this latest GMAC report was precisely to get inside the heads of women—and men—to better understand their different motivations for pursuing a graduate management education. Specifically, GMAC set out to solve the confounding puzzle of why, despite now making up a greater share of the applicant pool than men in many business master’s programs, women are still underrepresented in MBA programs around the world.

According to the Association to Advance Collegiate Schools of Business (AACSB), in 2015-16 women across all world regions earned 38 percent of MBA degrees, compared to an average of 64 percent for men. In the same year, women earned degrees from non-MBA business master’s programs at essentially equal rates as men—receiving an average of 51 percent of total non-MBA degrees. Not only that, these rates have been stubbornly static for the past five years. To address this seeming plateau, according to GMAC, MBA programs need to better understand what motivates women to pursue an MBA so that they can recruit, admit and design student experiences that attract more women. 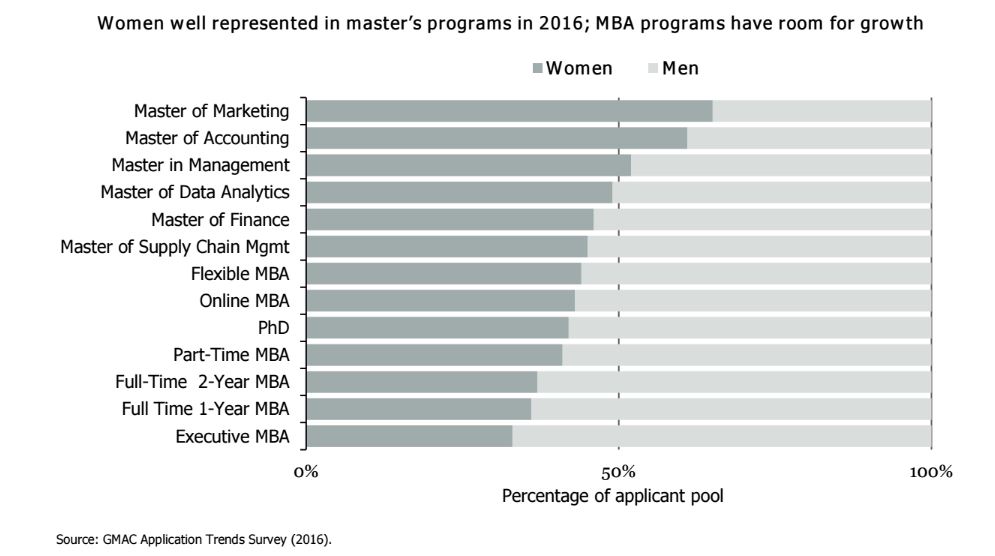 And so GMAC set about doing what it does best—digging into the extensive data it gathers as part of its global motivations-based segmentation study, its GMAT exam data and other research findings. In so doing, the folks at GMAC were looking specifically to reveal underlying factors that help explain why, even amid equal participation of women in specialized business master’s programs, gender parity still proves elusive when it comes to the MBA.

Parsing the data revealed that financial concerns are more top of mind for women than for men when it comes to committing to an MBA program. Of female respondents surveyed from around the world, 29 percent cited financial concerns as the key reason they had not yet accepted their admissions offer to business school. In contrast, the key reason men delayed—cited by 33 percent—was because they were waiting for offers from additional schools.

“The financing thing was what popped the most for me,” says Betty Su, GMAC chief marketing officer, who led GMAC’s Global Graduate Management Education Candidate Segmentation Study, on which this most recent analysis was largely based. It included responses from 5,900 men and women across 15 countries who had applied to a graduate business program between January 2014 and April 2016.

“What struck me most was the fact that even when female applicants had actually been granted admission into a university or business school program, the number one reason globally why those female applicants did not accept their offer of admission was financing—significantly higher than for men,” Su continues. “Men, especially in the United States and Europe, were significantly more likely to agree with the statement, ‘I am willing to pay whatever it takes to go to one of the top-ranked graduate schools.’ That stark difference was really compelling to me in terms thinking about how we can assist women in general to have more opportunities to finance their education, whether through tuition assistance, need-based scholarships, or simply making information more readily available in terms of what financing options exist.”

One of the study’s co-authors, GMAC Strategy Analyst Shelby Colby, had the unique experience of actually applying to business school—full-time, two-year MBA programs at Harvard Business School (HBS) and MIT Sloan School of Management—while examining closely what motivates women around the world to apply to business school. “It was really funny to me just how much what we were learning really resonated with my own experience,” Colby says. “So often I would turn to my co-author, Paula Bruggeman, and say ‘This is exactly what I’m feeling.’”

This was definitely true around the financing portion. “The week that we were spending the most time drafting the paper was actually the week I had to submit my financial aid forms for HBS,” she recalls. “I was really overwhelmed with the weight of how much of a financial investment this would be, and it was comforting to see that a lot of other women are wrestling with this.” Indeed, Colby says her concerns about whether or not she would get in were immediately supplanted by “Oh my gosh, how am I going to pay for this?!”

Interestingly, Colby’s husband will be pursuing a law degree at Harvard while she pursues her MBA, and yet her concerns about financing her degree outweighed his. “For him, it was like, ‘I want to go to law school, so we will figure out how to pay for it.’ And yet once I got into business school I questioned it because of the cost. I found myself thinking, ‘I don’t know if this is worthwhile for me.’” Ultimately, a more generous financial aid offer was one of the reasons she chose HBS over MIT Sloan. “Financial aid made a huge difference,” she says.